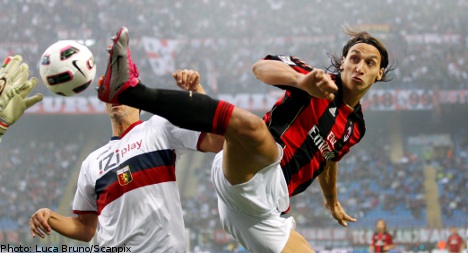 After an average year by his standards in the colours of Barcelona, Ibrahimovic has taken the Serie A by storm after his return to Milan, winning plaudits from across the football world.

“He doesn’t get the credit he deserves,” said Real Madrid coach Jose Mourinho only last week in an interview with La Gazzetta dello Sport.

But in Sweden, few sports stars are given the respect and admiration as the most famous son of one of Malmö’s tougher neighbourhoods, Rosengård. Ibrahimovic has won the “Golden Ball” for best Swedish player, in five of the last six years, and he was named captain on his return to the Swedish national team in the autumn.

There are some regional differences in the support shown for Ibrahimovic in the poll, with him claiming the nomination of 10.2 percent of those resident in the north of Sweden, and a whopping 40.1 percent of those living in the populous south of the country.