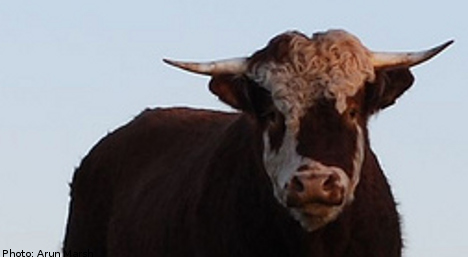 When paramedics arrived at the farm in Näsåker outside Sollefteå in northern Sweden shortly after lunchtime on Wednesday, the man was already dead. According to police the man had sustained injuries to his chest and stomach.

A neighbour was obliged to help contact a hunter in order to kill the raging bull, which weighed in at at least 450 kilogrammes, to enable the ambulance personnel to approach the dead farmer.

“I dared not get out of the car because the bull was still close to the man,” the neighbour told the Expressen daily.

By the time ambulance staff could approach the farmer he had already died from his injuries and was presumed to have been dead for several hours before help arrived.

According to several people in attendance on the farm, the bull had previously proven difficult to handle with a history of violence against people and vehicles in the village, the newspaper reported.

The police do not suspect any offence and an autopsy will be carried out on the deceased farmer in order to establish the exact cause of death.