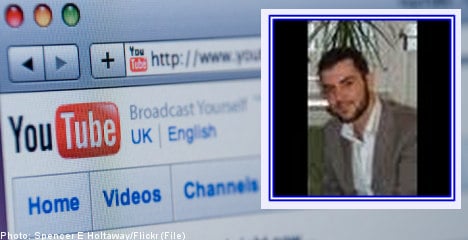 Taimour Abdulwahab, a 29-year-old sports therapist, had sent an audio message to Swedish intelligence service Säpo and the TT news agency minutes before the suicide attack in central Stockholm on December 11.

Though he killed only himself, investigators described the attack as a failed attempt to kill as many people as possible.

Abdulwahab’s message was not officially released in its entirety until December 15, but two days earlier a full version of the clip, in Arabic, English and Swedish, was posted on his YouTube account Mona123Timo, the Aftonbladet daily reported.

“The person who did this must therefore have had access to the material,” the paper pointed out, adding that Abdulwahab’s account on the video-sharing site had been in use for more than four years.

Swedish media also reported last month that sound analysis of the audio message showed he had at least one accomplice, since someone could be heard breathing in the background.

When contacted by AFP Monday, Säpo refused to comment on the reports, stressing the details of the investigation remained classified.

The audio files and comments have since been removed from the account, as have private pictures of Abdulwahab. The remaining videos are recording of singing birds recorded at his home in Luton, England, according to Aftonbladet.

“I do NOT have to justify myself to ANYONE, especially﻿ not ignorant people. I do what I please, I watch what I want and I subscribe to whoever I want. So don’t even bother leaving nasty messages, they will be removed.”

“This account has in all likelihood been used by Taimor and his wife. The question is who has access to the account now, if it’s an accomplice,” he told SvD.

Investigators have so far refused to officially confirm the identity of bomber, who was carrying a cocktail of explosives and is believed to have detonated the device prematurely, just metres from Stockholm’s busiest shopping street.

However, Abdulwahab’s family has confirmed he was the bomber.

In an interview with News of the World published Sunday, his 28-year-old wife Mona Thwany, who lives with their three children in Britain, insisted her husband “never gave off any clues that he was going to blow himself up.”

“I had no knowledge that he could do anything like that. If I had known, I would have stopped him,” she said.