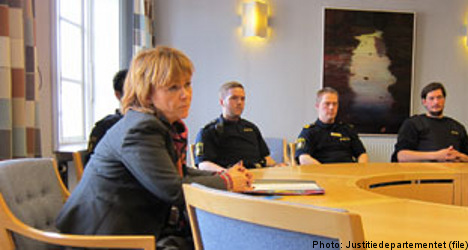 However, she did not mention a specific time in an interview with newspaper Svenska Dagbladet (SvD) on Monday. Both the Social Democrats and the Centre Party want it implemented this year.

“The previous amnesties have been a great success and I believe that we need to do some cleaning up between the rounds,” Ask told SvD on Monday.

There have been two previous weapons amnesties in 1993 and 2007, under which the public could anonymously surrender illegal weapons to the police without risking sentencing.

In the spring of 2007, nearly 14,000 weapons and parts of weapons, as well as 14 tonnes of ammunition, were turned in, SvD reported on Monday. The government is now calling for another amnesty.

Ask did not mention exactly when the next amnesty could be implemented. It would require planning for information about it to be spread accurately and the proper care for the submitted weapons.

The chairman of Sweden’s parliament, the Riksdag’s standing committee on the administration of justice (Justitieutskottet), Morgan Johansson, believes that it is urgent and would like to see the amnesty implemented this year.

The Liberal and Christian Democratic Parties’ spokesmen for legal matters have also expressed support for a weapons amnesty in the near future.

Johan Linander, a committee vice-chairman, has made clear that he would like to see an amnesty this year. He also believes that the Riksdag should consider some form of a permanent weapons amnesty, under which participants could voluntarily surrender weapons to the police to avoid prosecution.