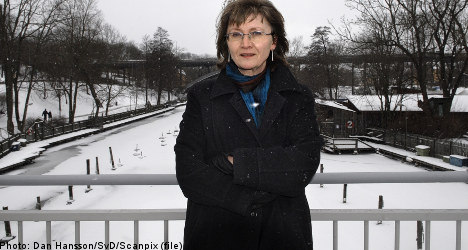 The longtime partner of Stieg Larsson says she could finish a fourth volume in the phenomenal Millennium series left incomplete by the Swedish novelist’s sudden death, if she secures the rights.

In a 160-page memoir to be published in France, Sweden and Norway next Wednesday, Eva Gabrielsson casts new light on the creation of the crime series that has sold more than 45 million copies worldwide.

Larsson, 50, died of a heart attack in November 2004, before the publication of “The Girl with the Dragon Tattoo”, “The Girl Who Played with Fire” and “The Girl who Kicked the Hornet’s Nest”.

Gabrielsson, his partner for 32 years, has been locked in a dispute with Larsson’s family over his inheritance. The journalist-turned-novelist died without a will, and the couple never had children.

“She is not fighting to recover money, but to obtain moral rights on Millennium and all the political writings of her companion,” said a spokesman for her French publisher, Actes Sud.

In her own words, Gabrielsson tells readers that “I am fighting for him, for myself, for you,” according to an advance copy of the memoir, titled “Millennium, Stieg and Me” seen by AFP.

Not unlike the trilogy’s main characters — crusading journalist Mikael Blomkvist and punk computer hacker Lisbeth Salander — Larsson campaigned throughout his journalistic career against extremism and racism with Gabrielsson, an architect, at his side.

On the much-talked-about fourth volume, Gabrielsson confirmed that Larsson, typing on a computer, had gotten just over 200 pages into the story before his untimely death.

“I am able to finish it … Steig and I often wrote together,” she said, adding that she would only do so once she gets undisputed rights to his work from the Larsson family.

“It is not my intention to recount here the plot of the fourth volume,” she said. “On the other hand, I want to say that Lisbeth little by little frees herself from her ghosts and her enemies.”

Confronted with death threats, the couple never married in order not to make it easier for neo-Nazis to track them, she explains in the book, which is to be published in other markets including the United States later this year.

Under Swedish law, the author’s assets — including copyrights — thereby automatically went to his father and brother.

In June last year, soon after a Swedish film adaptation of “Tattoo” was released in the United States, Gabrielsson turned down the family’s offer of €2.1 millions ($2.75 million) plus a seat on the board of directors of the company that manages the rights to Larsson’s work.

In her book, she condemns what she calls “the Stieg Larsson industry and brand… I don’t want to see coffee mugs and other ‘Millennium’ merchandise; I want to see the ‘real’ Stieg respected”.

Written in collaboration with French journalist Marie-Francoise Colombani, Gabrielsson’s memoirs recount her childhood, how she met Larsson, their lives together and the struggles they confronted together, notably through Expo, the periodical he founded in 1995 as the far-right was gaining traction in Sweden.

Both Larsson and his editorial staff “moved around constantly to escape the Nazis who were harassing them,” she recalled.

Millennium fans will find two chapters particularly gripping, as they flesh out the characters whose fictional lives echoed the real experiences of Larsson and Gabrielsson.