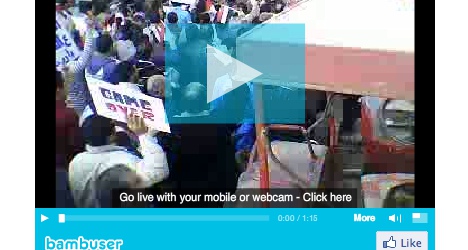 Bambuser, which provides live streaming of videos from mobile phones and webcams in Egypt, “has been blocked since 2pm [local time] yesterday [Tuesday],” CEO Hans Eriksson told AFP in an email.

Måns Adler, who founded the site in 2007, said he was convinced the Egyptian government was behind the blockade.

The last videos from Egypt on Bambuser were posted at around 2pm local time on Tuesday, show the massive protests, which have left three demonstrators and one police officer dead, according to the latest toll.

The Swedish website is very popular in Egypt, where Egyptians use it to stream videos directly from their country.

During the general elections there late last year, some 10,000 videos filmed in the country were posted on Bambuser, which Eriksson said was “an exceptional number.”

The site’s videos can be viewed through live streaming, which means no downloading is necessary.

The protests were ignited following the ouster of Zine El Abidine Ben Ali, the former president of neighbouring Tunisia, who fled the country on January 14th after 23 years in power.