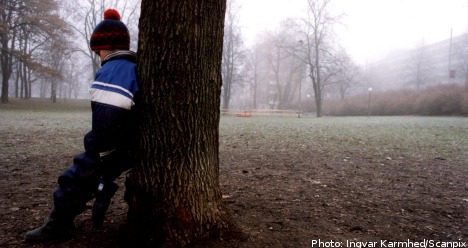 The agency has published its analysis of the programmes deployed in Sweden in a new report published on Friday which shows that the eight programmes are ineffective and counter-productive, recommending that schools re-evaluate their methods.

“The agency is unable to recommend any of the programmes in their entirety,” said Annika Hjelm at the schools board.

Hjelm cited one of the programmes – Friends – as an example of an “effective initiative” which nevertheless has elements that are counter-productive.

“One of the core ideas is the supporting peers, which should also function as observers and rapporteurs to the adults, which could lead to increased bullying,” she said.

“There are examples of how peers are subjected to degrading treatment. Having students become the eyes and ears for the adults has been linked to an increase in bullying in schools generally,” Annika Hjelm said.

Andreas Drufva at Friends told The Local on Friday that while the group welcomed the report, it’s methods should not be treated as a ready-made programme.

“The agency has said that none of the programmes should be used in their entirety. Many methods have received praise and we do not offer a complete programme but are an organisation which has developed methods to tackle bullying,” he said.

Drufva pointed out that its method applied to map the problem was one which received praise and said that Friends would be studying the report “with interest and draw conclusions from it”.

Many schools are reported to use anti-bullying programmes, and often blend several different methods. Ola Lindholm, executive editor of Kamratposten, a popular magazine aimed at school children, is outraged:

“It’s absurd that the municipalities are buying themselves free of the bullying issue. They put local tax revenue on programmes that have no proven efficacy and which in many cases have the opposite effect,” he said.

He claims to be not “one iota surprised” by the news that the anti-bullying programmes do not work.

“We who have been working with schools and bullying issues have surmised for a long time, that the programmes that municipalities purchase, and which are not based on sound research, do not have any effect.”

He meanwhile welcomed the agency’s report.

“It is fantastic that the study has been done. This proves that you have to work with bullying in a completely different way.”

The report shows that girls are just as vulnerable to bullying as boys. Efforts also work differently for girls and boys with the evaluation showing that what helps the boys may have the opposite effect for girls.

“There are several initiatives that reduce bullying involving boys. Efforts to promote relationships and to create closeness and togetherness. Standards of conduct that are developed in cooperation with staff and students,” Annika Hjelm said.

“For the boys it also matters that there are disciplinary strategies, so they know the consequences of non-compliance,” she said.

For girls, a systematic deployment of guards during breaks has proven effective.

“That all pupils know how it works is effective, especially for girls.”

“Students should be also involved in planning efforts. They must also have a say in the work against bullying,” she said, observing that this is not the case today with programmes also poorly coordinated with school staff.

“Decisions are often taken at the municipal level that all schools should work with the programmes. When the programme is not coordinated, it leads to some resistance among staff.”

Hjelm agreed with Ola Lindholm that the programmes are poorly researched.

“All the programmes are based on a weak scientific premise.”

According to the survey, 1.5 percent of students are bullied for a year or longer. This equates to 2-3 students in the average school of 191 students.

A total of 10,000 students in grades 4-9 (ages 11-16) participated in the study. The programmes that have been studied over a period of three years are Friends, SET, Lions Quest, Olweusprogrammet, Farstametoden, Skolkomet, Skolmedling and Stegvis.