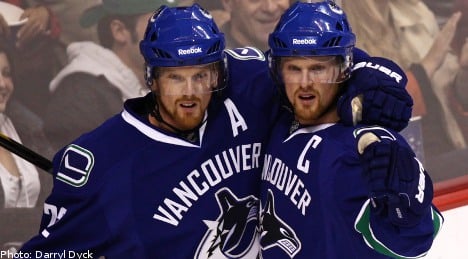 It took a televised game of eeny meeny miny moe to finally separate the Swedish Sedin twins as they were picked back-to-back during the inaugural NHL All-Star fantasy draft Friday meaning they will square off against each other for the first time as professionals during Sunday’s game.

Team Staal captain Eric Staal selected Daniel as his fifth pick while his brother followed immediately when Team Lidstrom captain Nicklas Lidström made Henrik their sixth pick as the draft was televised live on the American sports channel Versus.

The twins played three seasons together with Modo in Sweden before coming to North America. They were selected in the first round (Daniel 2nd overall and Henrik 3rd overall) of the 1999 NHL entry draft by the Canucks. They have been together ever since even playing on the same line throughout their nine seasons with Vancouver.

“Back in 1999 I got picked ahead of Henrik and it happened again today so I am happy,” Daniel quipped Friday.

Henrik threw down the gauntlet to his 29-year-old sibling.

“Team Lidstrom got the best twin, that’s for sure,” Henrik joked.

The two captains filled out their rosters for Sunday’s game and Saturday’s skills competition by choosing from a pool of 36 international stars.

Pittsburgh Penguins captain and Canada’s gold medal Olympic hero Sidney Crosby was not in the pool of players. Crosby was forced to skip the showcase event after suffering a concussion when he was blindsided by Ovechkin’s Washington teammate David Steckel on January 1st.

Despite being the last player picked, Toronto Maple Leafs forward Phil Kessel came out ahead of everyone else.

For his troubles Kessel was awarded a flash sedan car and $20,000 to donate to the charity of his choice.