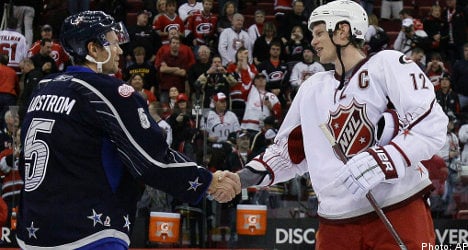 Centres Brière, who plays for NHL wins leader Philadelphia, and Kopitar, who plays for Los Angeles, helped the team named after the veteran Swedish defenceman rally from a 4-0 deficit after only 5:41.

“We’ve got enough skill in these games where you can catch up right away. It’s a lot of fun being here and playing alongside these guys,” said Lidström’s Shea Weber of Canada, who set up four goals for his squad.

Players were selected by fans and league coaches, then divided in a draft by team namesakes Lidström of Detroit and Canada’s Staal of the host Carolina Hurricanes in an unprecedented format.

Fellow Swede Loui Eriksson of the Dallas Stars Kopitar, American Dustin Byfuglien and Canadian Matthew Duchene answered for Lidström’s side to level the game after one period.

Duchene was given the first penalty shot in All-Star Game history in the third period after Ovechkin slid a stick at him on a breakaway. Swedish goalie Henrik Lundqvist of the New York Rangers denied Duchene on the attempt.

Canadians Patrick Sharp, named the game’s Most Valuable Player in a losing cause, and Kris Letang put Staal’s team on top in the second period before Kopitar and Canadians Steven Stamkos and Brière answered for the Lidström side.

In the third period, Staal himself equalised and Letang scored again to put Staal’s squad ahead 8-7 before Canadians Brière, Jonathan Toews and Martin St. Louis answered to put the Lidströms ahead to stay.

Canada’s Rick Nash trimmed the Staal deficit to one goal before Eriksson scored into an empty net with 71 seconds remaining after the Staal squad pulled the goaltender in favor of an extra attacker.

Staal added a second goal with 34 seconds remaining, but his team could not equalise before the final buzzer.

“It was just one of those games where offence dominates. I had a lot of fun all night. It would have been nice to win, too,” said Sharp.