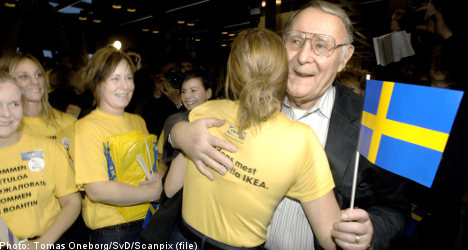 Kamprad at opening of Sweden's northernmost store in Haparanda, November 2006

The criticism of Ingvar Kamprad and his empire reveals ignorance and repeats the old Swedish scorn for business owners. The criticism should instead be turned against the Swedish model, which forces those who run successful family business into exile in order to secure their legacy. The view of family-owned businesses is not that they bequeath, but that they borrow that company from their children! Even the Rausing family realised early on that the family business centred on Tetra Pak would be put at a disadvantage if the company remained in Sweden.

The cases of Kamprad and Rausing show that Sweden must adapt its rules so that new family dynasties can emerge in Sweden based on the groundbreaking innovations that spring from advanced research and development. The quid pro quo is to make charitable donations tax deductible and thus provide an incentive to private capitalists to give back some of what they earned as a show of thanks to their homeland.

The world is full of dynasties, many of which we find in the business world: Rockefeller, Rothschild, Morgan, Ford, Porsche, Agnelli (Fiat), Toyoda (Toyota) and Bombardier. Many have started in trade and finance, as trading houses, brokerage firms, and investment banks. Other family dynasties have built their fortunes around the exploitation of natural resources during the industrial revolution, such as oil in the case of Rockefeller. We also find several family dynasties from the expanding automotive industry of the 20th century.

Sweden has a few – but sizeable – dynasties. If the requirement is at least four generations, we’re talking about Bonniers, the Wallenbergs and Johnson. Thus, we consider Kamprad and his sons as a potential dynasty.

The debate surrounding Ikea’s billions must be seen in light of the spirit of family-owned enterprises. Let us first note that Kamprad has been a pioneer and catalyst for a new view of industrial logic in his field, characterised by flat packages and new distribution technologies. Instead of battling for better market conditions and tax laws in his home country, Kamprad decided early on to challenge his competitors by placing a large part of his production abroad, at first to low-cost Poland. Kamprad had no state monopoly to contend with and the Ikea profit machine wasn’t dependent on the highly regulated credit market in the postwar period or on access of capital via the stock exchange.

A common feature of Swedish family dynasties is that they broke with the usual rules of the game and the logic in the market in their field. They have in opposition to or cooperation with the powers that be changed market conditions and created room for opportunities from which they could grow. In order to bring about these changes in market conditions, they had to act lobbyists or create strong ties to political powerbrokers.

With their companies, they have created new markets and the economy has been rewarded with a growing number of jobs. As companies have grown into major employers and thus become important for the country’s labor market, they have also ended up operating in the interests of politicians. The owners have become part of the establishment and developed goodwill with both politicians and the public, which in most cases, helps to strengthen the brand for both business and the family dynasty.

In the Anglo-Saxon world, family dynasties and major financial titans have always been expected to return some of their wealth to society through donations: in the United States, the volume of annual donations reaches levels comparable to Sweden’s gross domestic product.

Sweden had a donation culture in the early 1900s, but after World War II it became extinguished by government transfer systems, high income and corporate taxes, and the regulation of capital markets. Recent deregulation and the abolition of the inheritance and wealth taxes lays the groundwork for a donation culture renaissance in Sweden.

What that cases of Percy Barnevik and now Kamprad show is that Sweden needs to build a thriving donation culture. Role models can be found in the United States, with Bill Gates and Warren Buffet the most shining examples. The means is a the creation of tax- deductible donations for research, education, hospitals and infrastructure. And increasing pressure on Kamprad and other newly rich to donate. Doing so would then transform self-made business tycoons from the victims to the heroes of the welfare society.

Hans Sjögren is a professor of economic history and institutional economics at Linköping University as well as director of the Institute for Economic and Business History Research (EHFF) at the Stockholm School of Economics.

This article was first published in the Svenska Dagbladet (SvD) newspaper on January 29th, 2011. English translation by The Local.