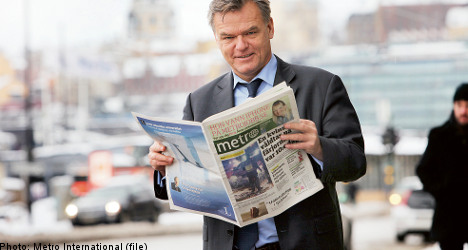 The company posted a net profit of €4 million ($5.5 million) in 2010 compared to a loss of €21.7 million in 2009. Sales inched up 1 percent to €222.5 million, Metro added in its annual earnings report, but excluding sales of assets and acquisitions, sales were up 8 percent.

“Metro’s turnaround continued in 2010,” CEO Per Mikael Jensen said, saying the company’s performance had 2009 “improved quarter by quarter” since the fourth quarter of 2009.

The company’s operational income was brought down by investments made in the French market to better compete with other free dailies. Because of a boost in advertising ahead of the holiday season, the fourth quarter is usually the company’s best, while the first quarter of the year is usually the worst.

Metro international was launched in Sweden in 1995 and is published in 19 countries. It has some 16.69 million readers at the end of 2010, compared to 16.81 million at the end of 2009. The daily’s main markets are France, the Netherlands, Italy and Sweden.