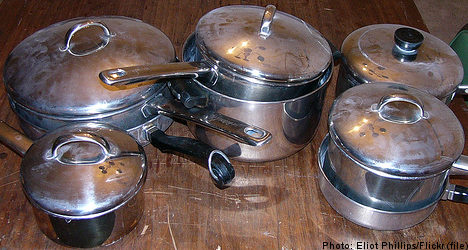 At Östra Hospital in Gothenburg, ordinary bedside alarms are not available to every patient due to overcrowding. The saucepans and spoons were issued in the children’s ward to lift their spirits.

At another department, the staff shopped at hardware chain Clas Ohlsson to buy bells for their patients, the Swedish Association of Health Professionals (Vårdförbundet) reported on Friday.

The Swedish National Board of Health and Welfare (Socialstyrelsen) found that hospital overcrowding is common at all nine of western Sweden’s hospitals with emergency departments.

“We have long ago passed the limit of what is acceptable. This is a huge problem,” a shocked Maria Tenggren of the union, who also works at Gothenburg’s Sahlgrenska University Hospital, said in a statement.

At Sahlgrenska/SU Östra, Alingsås and Mölndal, the supply of hospital beds is so scarce that it creates a risk for patient safety, the board wrote in its report.

“We have for years nagged about the problem of overcrowding, but nothing happens,” said Tenggren.

She noted that there are currently three empty wards that are ready to open if the overcrowding becomes too much to handle and that the hospital has an action plan in place.

“However, with all the restrictions and reservations that exist, the opening of these extra spaces is rare. It looks great on paper, but it means nothing in practice,” said Tenggren.

In addition, the board’s inspection showed that at Östra Hospital, patients were relocated to wards where staff did not have the necessary skills to care for them. In addition, they often lacked oxygen and suction equipment, as well as bells.

The staff at the hospital in Mölndal could not adjust to the addition demand for care needed and had personnel who lacked the skills to care for relocated patients.

Mats Tullberg, the chief physician at SU, told newspaper Göteborgs-Posten (GP) on Friday that overcrowding is a major concern and that the relocation of patients to other departments was not a good sign.