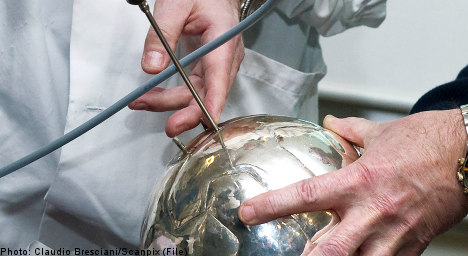 The longstanding rumours that such engravings existed were confirmed when the trophy was opened up by silversmith Henrik Ingemansson this week the Dagens Nyheter (DN) newspaper reported.

Claims that the original silversmith Ingemar Eklund had added his own personal stamp to the trophy have been flying around for months, so, refusing to see the funny side, the Swedish Football Assocation (Fotbollförbundet) decided to undertake its own investigation.

The trophy is named after Swede and former UEFA president Lennart Johansson, who governed the football body from 1990 to 2007. As a committed fan of Stockholm club AIK, he would have been less than amused by the allegations.

Ingemansson from the Baltic island of Öland, who was tasked with opening the cup and removing the offending graffiti, said he saw not just the Hammarby and Djurgården, messages but several others as well.

He said it was not so surprising that the inscriptions had not been spotted previously.

“It is quite difficult to see them when they are on silver. It is like pointing a lamp at a mirror and looking at the reflection,” Ingemansson told DN.

He now has to take off the markings and the new trophy will be ready on Tuesday.

Keen to ensure that Ingemansson doesn’t try to add his own personal stamp to the cup, the football association will strictly supervise the operation to remove all the inscriptions and put the trophy back together again to avoid any further tampering.