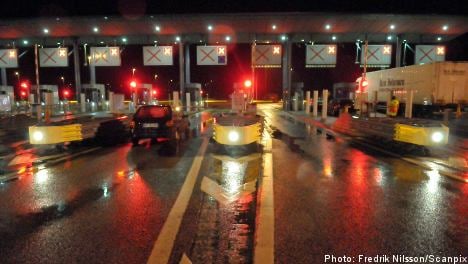 “At the most we have had 35,000 customers without power during the night. We are now working flat out with reparations and my gut feeling is that most of those affected will get their power back before 8pm this evening,” said Johan Aspegren at Eon.

Eon has launched a number of helicopters in order to track the damage to its network and guide repair work.

Aspegren said that Monday’s storm was similar in intensity to Storm Gudrun which swept through the region causing widespread damage back in January 2005.

The winds, which reached 115 kilometres per hourin some areas, caused disruption to rail traffic in Skåne and Blekinge.

According to local rail operator Skånetrafiken, trains are at a complete standstill between Perstorp and Kvidinge, and between Hässleholm and Karlskrona. The disruption is expected to continue until lunchtime on Tuesday.

Meteorological office SMHI has forecast that the stormy weather will push east towards the Baltic Sea during Tuesday.

“The storm over Skåne and Blekinge is moving east over the Baltic Sea during the morning. It will remain windy in the region, but during the day the winds will fall below the level for warnings,” said Anna Hagenblad at SMHI.

Fallen trees blocked traffic on the E6 motorway near Vellinge outside Malmö during the night and near the Kropp junction outside Helsingborg a truck collided with a tree. The road was passable once more in the early hours.

Police in southern Sweden had by 4.30am received over 80 storm-related calls but concluded that no serious injuries had been reported.

“It’s mostly trees which have fallen across roads, scaffolding which has collapsed and the odd roof blown away,” said Skåne county police officer officer Anders Nilsson.

“No injuries have been reported,” he added.

At Centralplan square in Malmö a scaffolding fell over a glass partition, but no one was hurt.

In Kronoberg county there were reports of trees falling across roads, as was the case in Halland. In Varberg the emergency services reported that the roof of a hotel was threatening to break off, and in Laholm they were alerted concerning a stable that was about to blow over.

The Storabält bridge linking Fyn and Själland in Denmark was reopened for traffic again at 3am, although the Öresund bridge remained off limits for motorway traffic.

At midnight, the winds began to reach gale force as they swept in over Malmo.

“We have so far managed to measure gales in Malmö of 93 kilometers per hour,” said Lars Knutsson of SMHI.

Winds were stronger at sea, with the dial in Väderö, Hallanan measuring 115 kilometers per hour at times and averaging 79 kilometres per hour.