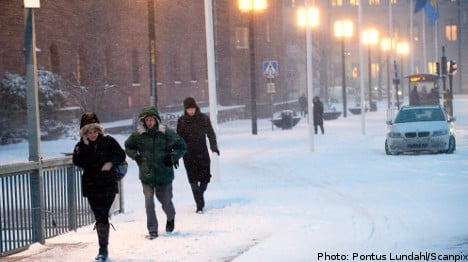 Monday recorded the coldest night of the winter, with the residents of Vajmat in northern Lappland experiencing temperatures as low as -42.6 degrees Celsius, according to a Swedish Transport Administration (Trafikverket) measurement.

The icy temperatures were not limited to the far north however, with as low as minus 28 degrees Celsius in Tullinge in southern Stockholm in the early hours of Monday.

In the midst of some of the coldest temperatures of the winter, some 450 customers of electricity utility Vattenfall were left without power on Monday night.

The customers in Jokkmokk in the far north of the country lost their power just as temperatures outside fell to below -40.

“It probably got a little cold, it is minus 40 there. But no injuries have been reported, most people use wood stoves to warm up,” said Peter Stedt at Vattanefall.

According to meteorological agency SMHI the cold snap is set to keep the country in its frosty grasp for at least a couple of weeks.

Cloudy weather in southern areas will keep temperatures close to zero on Wednesday, but further north the dial is expected to plunge to around 25 degrees Celsius and lower.

In return many northern areas will experience clear, sunny weather in the remainder of the week as the high pressure front establishes itself across the country.

Over the weekend and into next week, SMHI forecast that the cloud cover will break up in the south of the country, bringing with it colder temperatures.