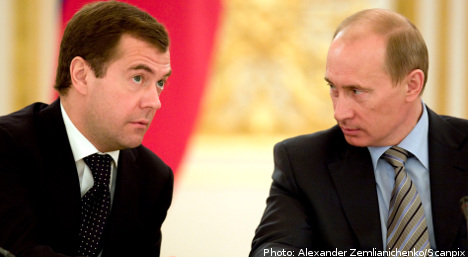 The cooperation, known as e-PINE and largely unknown to most Swedes, worked to coordinate policy and share information on areas concerning Russia, Georgia and Belarus, according to the documents reviewed by the Swedish Dagens Nyheter (DN) daily.

E-PINE stands for “enhanced partnership in northern Europe” and involved officials at the highest level, meeting bi-annually in Washington and in Europe alternately.

Swedish participants include the Director-General for Political Affairs Björn Lyrvall and among the US delegates named js Deputy Secretary of State Daniel Fried, DN reported.

According to the report, Swedish delegates at a meeting in Washington in 2008 suggested measures to “build up” Dmitry Medvedev in an attempt to drive a wedge between the Russian president and his predecessor and current prime minister, Vladimir Putin.

The documents reveal that all of the nine countries involved in the cooperation experienced difficult diplomatic relations with Russia and expect these relations to deteriorate in line with the changing face of politics in the country.

DN reported that the documents also reveal that following the war between Russia and Georgia in 2008, it was concluded by Björn Lyrvall that “business as usual” with Russia was no longer possible.

Sweden and the US are reported to share the same view on the Georgia conflict and underlined the need to show support for the republic.

Sweden’s foreign minister Carl Bildt on Wednesday denied that Sweden had tried to divide the Russian leadership, arguing that Sweden’s expression of support for Medvedev is not in any way strange.

“We wanted to support Russia’s newly elected president and his ambitions to modernise Russia. There is nothing odd in that. It would have been strange had the opposite been the case,” Bildt said.

The foreign minister, who presented Sweden’s foreign policy platform for the coming year in a speech to the Riksdag on Wednesday morning, argued that Sweden supports Russia’s development into “a full political and economic partner in Europe”.