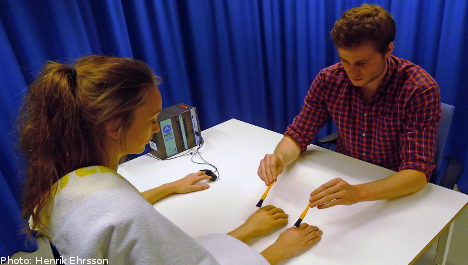 The scientists were able to make healthy volunteers believe that they had an extra appendage by stroking the subject’s right hand and a prosthetic rubber hand with two small brushes, synchronizing the strokes as perfectly as possible.

“What happens then is that a conflict arises in the brain concerning which of the right hands belongs to the participant’s body,” said Arvid Guterstam, one of the scientists behind the study in a statement.

Guterstam argued that the expectation was that that the brain would select only one of the hands as the body’s own, presumably the real arm.

“But what we found, surprisingly, is that the brain solves this conflict by accepting both right hands as part of the body image, and the subjects experience having an extra third arm.”

The team designed the experiment to test the classical question in psychology and neuroscience of how we experience our own bodies and their findings have been published in online scientific journal PLoS ONE.

In order to prove that the prosthetic arm was truly experienced as a third arm, the scientist ‘threatened’ either the prosthetic hand or the real hand with a kitchen knife, and measured the degree of sweating of the palm as a physiological response to this provocation.

The study involved 154 healthy volunteers and it is hoped the results may help to create new applications in prosthetics research.

“It may be possible in the future to offer a stroke patient, who has become paralysed on one side of the body, a prosthetic arm that can be used and experienced as his own,” said Henrik Ehrsson at the Department of Neuroscience.

“It is also conceivable that people with demanding work situations could benefit of an extra arm, such as firemen during rescue operations, or paramedics in the field.”