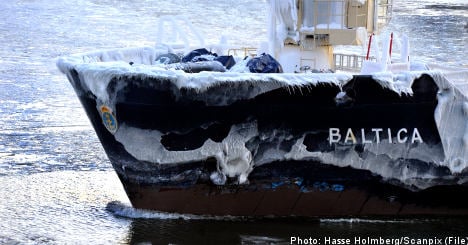 About 250,000 square kilometres of the Baltic Sea are now covered in ice according to the Swedish Meteorological and Hydrological Institute (SMHI).

The last time so much of the Baltic was frozen was the winter of 1986-87, when ice covered nearly 400,000 square kilometres of the sea’s surface.

SMHI warns that ice coverage on the Baltic could expand further in the coming days, possibly setting a new record.

“The surface water is cold and if winter-like temperatures continue in the region a few more weeks, we’ll probably get an icy winter on par with 1984-85, one of the toughest winters in the 1980s,” SMHI oceanographer Amund E. B. Lindberg said in a statement.

According to SMHI’s estimates, ice may eventually connect the Swedish mainland all the way out to the Baltic island of Gotland, which lies about 90 kilometres off of Sweden’s eastern coast.

Baltic ice cover is not only unusually wide this winter, but also unusually thick, especially in Gulf of Bothnia off Sweden’s northeastern coast, where air temperatures have consistently hovered around -30 degrees Celsius in recent months.

In some areas far out at sea, ice is more than 60 centimetres thick in the northern parts of the gulf.

Recent cold temperatures near the southern areas of the Gulf of Bothnia have resulted in ice thickness growing by 30 centimetres in just two weeks.

Icebreakers from the Swedish Maritime Administration (Sjöfartsverket) have been working round the clock to ensure that sea routes on the Baltic remain open, but strong winds expected at the weekend may complicate their work.

“For the moment, sea traffic is flowing nicely,” Ulf Gullne, head of the Maritime Administration’s icebreaker unit, to the TT news agency.

“But if storms kick up, there are always problems because the ice begins to crumble and that creates banks.”