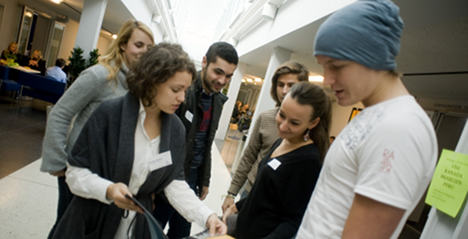 Going on a university exchange can be one of life’s most enriching experiences. Exchange students learn about another culture from the inside and get to know local students, while all the time gaining course credits towards their courses at home.

Stockholm University is home to about 1,000 undergraduate foreign exchange students at any one time. The university’s excellent academic reputation and its location in Sweden’s beautiful, buzzing capital make it a popular choice for students from all over the world.

While the largest number of exchanges in which Stockholm participates are with European universities – France, Germany and Finland being the largest source of students – others come from much further afield. At the time of writing, the largest numbers of non-European exchange students were from the United States, Australia and China.

Yeung Yeung Fok is a sociology student at the Chinese University of Hong Kong. He chose Stockholm for his exchange because he wanted “to go somewhere very different from Hong Kong – somewhere cold and close to nature.”

One of Stockholm’s major attractions, distinguishing it from universities in many other European countries, is that it offers over 200 undergraduate and master’s level courses in English to exchange students. These enable students to gain a different perspective on the subjects they are studying at their home universities. The most popular courses among foreign exchange students are in the Law and English Departments and in the School of Business.

But many students also want to learn something about Sweden while they are there.

“Courses related to Sweden are popular, and most people want to learn a bit of Swedish,” says Ronald Trumpf Nordqvist, international coordinator at the university’s International Exchange Unit. Particularly well-attended courses include ‘Sweden, Society and Everyday Life’, ‘The Viking Age’ and ‘The Swedish Model’, which examines the Swedish economic and social model.

The experience of studying in Sweden comes as a pleasant surprise to many exchange students, according to Trumpf Nordqvist.

“Our student satisfaction surveys show that people appreciate the informality; the fact that it’s very easy to contact academic staff. Many people, particularly students from Asia, find our interactive educational environment to be a refreshing contrast to the way they’re taught at home.”

This is an aspect of Swedish university life that Yeung Yeung Fok appreciates:

“At home, the main teaching formats are lectures of about 100 people. Here there are more seminars and tutorials. It is a great experience to talk so much with my teachers and classmates and to learn from them,” he says.

Kat Grigg, who has come to Stockholm from the University of Queensland in Brisbane, Australia, to study for the final semester of her master’s, finds the informal teaching style similar to back home. The main difference for her is that students study one course at a time, instead of four courses at once in Australia.

“You focus on one subject for two-and-a-half months, which means you get immersed in it – and you get to know your classmates very well.”

Outside academic life, Stockholm also has much to offer. Many students take internships in the city, and the nightlife of one of Europe’s most sophisticated capitals is something that many take advantage of.

“The Swedish people are so nice and are willing to interact and answer my questions. I really like that,” says Yeung Yeung Fok.

Kat Grigg is full of praise for the university’s efforts to make her feel at home. An orientation day was provided when she arrived, and she was assigned a Swedish mentor:

“My mentor has been great – she has taken me to art galleries and restaurants in hot parts of town that I might never have visited otherwise,” she says.

Like in many major cities, finding somewhere to live in Stockholm can be difficult. While free movers generally rent on the private market, the university lets out 450 rooms in halls of residence to regular exchange students. Some of these rooms on the main campus in the ‘Lappis’ area, but most are at other locations around the city.

All rooms have private bathrooms and kitchens shared between about 10 students. Yeung Yeung Fok speaks highly of his accommodation in a student corridor in Kungshamra. His room, he says, is larger than he had in Hong Kong, and is equipped with a chair, a bed and a wardrobe, as well as high-speed internet.

“It’s also near Ulriksdal Castle and the forest, which is beautiful.”