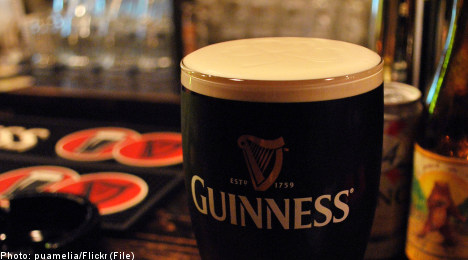 If St. Patrick’s Day unleashes your mischievous inner Leprechaun, or that endless chase for the pot of gold leaves you a tad thirsty, come on down to your local in Malmö.

That’s right – Malmö is not just for the vodka-loving Vikings. The burgeoning city offers a handful of watering holes that claim to hold fast to the United Kingdom’s tradition of public houses.

While we give a nod to the pubs’ revolutionary contribution to modern society by first introducing the concept of the bar counter to order your brew, you might not find other traditional elements such as frosted glass windows that obscure your visit or the even more elusive snug.

You can, however, satisfy your pub grub cravings since most offer British delicacies such as fish and chips, bangers and mash, and shepherd’s pie.

A traditional British pub with a relaxed atmosphere and decor that transports you to the UK. The Pickwick Pub boasts a broad portfolio of beers and offers a short menu of snacks and side dishes should hunger strike.

Monday nights are Monday Music Jam from 8pm, Wednesdays are the popular Quiz Night starting at 8.30pm and Sundays you can bring your four-legged furry friend who can order off a special dog menu.

Don’t miss the After Work specials Mon-Sat. until 7pm where you can guzzle your favourite brew for 55 kronor ($8.60) a pint. Dartboards abound.

If you’re a Guinness devotee, Paddy’s Bar & Restaurant is the place for you. This Irish pub is centrally located off Stortorget and claims the dark suds as its specialty. The connecting dining room offers a more extensive dinner menu that breaks from traditional pub food and offers internationally influenced meals such as a chicken stir-fry with Thai basil, or grilled venison with lingonberry gravy.

Live bands dominate the scene on weekends and After Work is every day during the week until 6 or 7pm. Their Lion’s Passage terrace is open during the summer season.

A lively Irish pub in the centre of Malmö with an impressive range of beer and whiskey, Fagan’s airs all major rugby and football events on their big screen. You can also catch live traditional Irish and contemporary music on the weekends.

As is the pub trend, Fagan’s also hosts quiz night at 8.30pm Thursdays with After Work every day during the week until 6pm or 7pm.

In true pub fashion, Nya Tröls Bar offers an extensive list of beer (more than 200!) from around the globe including Ethiopia, India and Israel.

They coin themselves the Swedish answer to English pubs and provide both traditional English and Swedish dishes such as fish and chips or plank steak.

In a twist, Nya Tröls offers After Sleep, a Saturday special from 1pm-4pm where you can order fish-n’-chips for 109 kronor with reduced prices for beer and wine. After Work is daily during the week with pints as cheap as 39 kronor ($6) and Sundays bring a buffet brunch from 11am-2pm.