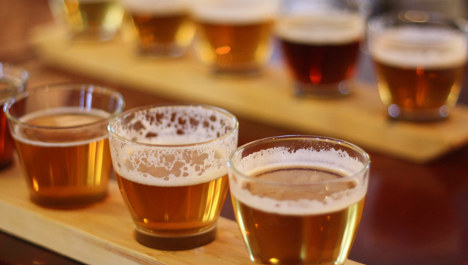 Imagine I offered you the choice of only eating one type of food – let’s say a cheeseburger – for every breakfast, lunch and dinner for the rest of your life.

Unless you had one serious fast food addiction you probably wouldn’t agree to it would you?

The funny thing is a lot of people do exactly this when it comes to their beer, with a majority of beer drinkers stubbornly sticking to the same style of beer (and often the same one or two brands) for most of their drinking lives.

Very often these beers are the pale yellow lagers that represent the vast majority of beer consumed around the globe. Brands such as Budweiser (the planet’s largest-selling beer brand), Corona, and closer to home Carlsberg and Falcon Export, are often the only style of beer many people ever try and thus define it.

The great news is that fizzy yellow lager is only a single page in the very thick book about beer.

In this month’s article I’m urging you to turn that page over by asking you to try five different styles of beer that are all easily available to buy at the (Swedish state alcohol monopoly retailer) Systembolaget.

In doing so I’m hoping you’ll give beer a better chance to impress you, to flirt a little with your taste-buds and to show you that the earth’s favourite alcoholic drink is everything but a one-trick pony.

Let’s start off with something that’s probably pretty familiar to most of you:

Yes I know I said that lager is the sort of beer I’d like you to break away from once in a while but the truth is lager is the world’s most popular beer style for a reason – it’s very refreshing to drink!

Try Pilsner Urquell – recognised as the first golden beer created back in 1842, with a deliciously subtle malt body that hides a spicy bitter backlash from the famous Saaz hops used to brew it.

Once the UK’s national drink before the arrival of fizzy Euro-lagers, bitter is as British as the Queen, William Shakespeare and David Beckham all rolled into one.

By definition bitter beers have a medium to high level of bittering hops in them but come with an almost endless choice of supporting flavours and qualities.

Bitters are generally low to mid-strength in alcohol, making them the perfect drink when out socializing.

If you want to go ‘old world’ try Spitfire Premium Kentish Ale or Adnams The Bitter. However for a more contemporary spin try Bedarö Bitter from Nynäshamns Ångbryggeri that uses US hops to add layers of pine and zesty fruit flavours.

When wheat is added to beer the effects can be spectacular. The beer itself takes on a lighter colour and the distinctive top-fermenting yeasts used to make them often throw out smells of bananas, cloves and band-aid.

In Germany weissbier (white beer) or weizenbier (wheat beer) is served in huge ‘flower vase’ glasses and is often drunk with food. Belgium has developed its own style, witbier, often seasoned with curacao orange peel and coriander.

If you like your beers to pack a stinging hoppy punch then this is the beer style for you. First developed by the British in the 1800s to withstand the long sea voyage to India and to quench the thirst of the Raj.

Classic IPAs use hard water to deliver a refreshing mineral quality, while a boat-load of hops provide grassy aromas and a tongue-curling finish.

US brewers helped revive IPA in the 1980s and it is today one of the most brewed styles of craft beer in the world.

For a more traditional style IPA try Marstons Old Empire. If you want to ramp up the hop hit then give Sierra Nevada Torpedo Extra IPA a whirl.

The boundary between these two beer styles is so blurred it’s sometimes hard to tell them apart. What we do know is that porter came first around 1720 and that stout grew out of it as a stronger, often darker, more roasted version.

While enjoying the malted delights outlined above, remember that there are dozens more beer styles out there to try, so why not grab a glass and start exploring!