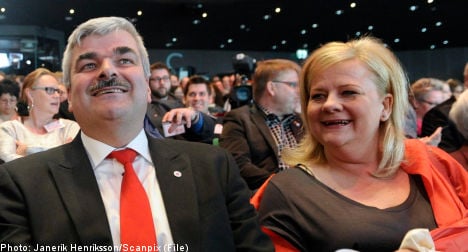 Åsa Lindgren, who first met Juholt in 2005, was given a suspended sentence and fined by the Stockholm District Court in 2007 for having defrauded her employer of nearly 46,000 kronor ($7,200) between 2005 and 2006, Swedish business daily Dagens Industri (DI) reported on Monday.

At the time, Lindgren worked for Tui Fly Nordic, an airline operated by Swedish charter company Fritidsresor, where she was responsible for ensuring that customers were compensated for lost luggage and other problems.

On eleven separate occasions, she filed faulty information, including fake letters on behalf of fictional passengers, which resulted in the company paying out improper reimbursements.

Nine of the improper filings were completed using an automated form which resulted in 23,800 kronor being paid directly into Lindgren’s personal bank account, according to DI.

On the two remaining occasions, she filed false claims normally used to reimburse passengers for lost baggage, netting her a total of 22,108 kronor.

Lindgren, who was fired in 2006, admitted to the scam. As she had no previous criminal record, the court fined her 9,000 kronor and gave her a suspended sentence for fraud.

When questioned by DI about the revelations, Lindgren directed all questions to Juholt who, through his press secretary, said that his girlfriend informed him of her crimes as soon as she was caught.

Speaking later on Monday with the Expressen newspaper, Lindgren did little to hide her conviction.

“I’m convicted for this. I’ve paid for my crime,” she said.

Speaking with Aftonbladet, Juholt explained that the incident occured early in his relationship with Lindgren.

“I told her she needed to take responsibility and accept her punishment as an adult,” he said.

“She committed a crime, has confessed to it, paid for it, and I’ve forgiven it.”