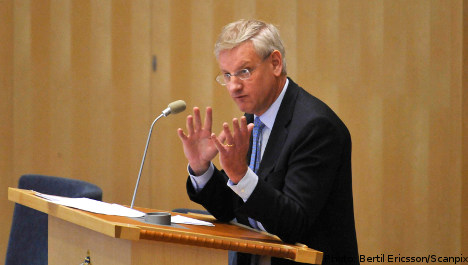 The parliament voted through the proposal by a resounding 240 to 18, with five abstentions.

“Sometimes the risk of intervening is less than the risk of not doing so,” said foreign minister Carl Bildt in reference to concerns that the intervention could, in a worse case scenario, harm civilians.

Bildt underlined that Libya and north African countries are neighbors to the EU and what is currently happening there is having a very real impact in the form of refugees arriving in boats on European islands in the Mediterranean.

“Lampedusa is a part of the EU, just like Ven, Sicily and Crete, and as much as Öland and Gotland,” he said.

The vote clears the way for the Swedish air force’s first international deployment in 48 years.

Swedish Prime Minister Fredrik Reinfeldt said Tuesday he would put to parliament the proposal of sending eight Swedish-built fighter jets, a transport plane and a reconnaissance plane to Libya, stressing Swedish jets would not be involved in ground strikes.

Sweden’s participation in the mission had received broad political support and the proposal was widely expected to pass.

The only parliamentary group opposing the measure was the Sweden Democrats.

The party’s spokesperson Mikael Jansson warned against Swedish involvement ahead of Friday’s vote.

“What right to we have to take sides in a civil war through a one-sided bombardment,” he said predicting a long period of fighting and raised the prospect of clan warfare following a defeat for Muammar Qaddafi.

The Social Democrat foreign policy spokesperson Urban Ahlin meanwhile argued that the decision to support the mission sanctioned by the UN Security Council was an easy one.

“We respond when the UN calls for the protection of civilians, this is a Swedish tradition,” he said.

The Nordic country is not a member of NATO, although it has been in NATO’s

International Security Assistance Force (ISAF) force in Afghanistan with some

Sweden’s air force has not been involved in action since 1963, in a UN-mandated operation in the former Belgian Congo.