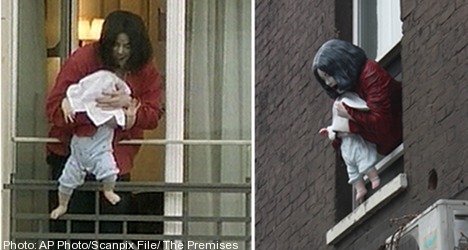 “I am pretty surprised at the overwhelming amount of negative reactions from the Michael Jackson fan base,” von Koehler said in a statement.

“I am referring specifically to the presumption by many that the piece was created as a negative, judgmental or ‘jokey’ commentary on Michael Jackson and his personal or professional life. This is not the case at all.”

The sculpture, called ‘Madonna and child’ was installed at The Premises recording studio, used by famous artists such as Arctic Monkeys, Amy Winehouse and Nina Simone, in March.

Shortly after, the studio started receiving droves of angry calls and emails and even death threats from Jackson fans worldwide.

The sculpture, suspended high up on the side of the building, is a life-size depiction of the pop icon dangling his baby son out of the window, depicting an incident which took place in Berlin in 2002, causing quite a stir at the time.

While showing his infant son to the press, Jackson momentarily lost his grip of the child and it was feared the baby would fall.

Fans now claim that the statue is an attack on the singer.

“What drove this so called artist to recreate this crap? My goodness, this thing MJ did was for 3 flippin seconds and you people create this? You should be ashamed of yourselves cashing in on one of the most beloved human being this planet has ever had,” one fan wrote on the recording studio’s blog.

“This is a shame! And without respect for the greatest performer of all time! Michael was a very loving person, and all he wanted to was show his child to the world cause’ he was so thrilled over it! This Maria has NO respect for MJ”, another fan commented

But recording studio CEO Viv Broughton does not agree.

“How can a work of art that is faithful to a real event be construed as an attack on anyone? The sculpture depicts a moment of high drama as he offers his son for the adulation of his followers. It’s certainly not meant to ridicule but neither is it a homage,” Broughton wrote in a statement.

This is the second Michael Jackson statue to cause an uproar in the UK in recent weeks.

Fulham Football Club chairman and previous owner of Harrods, Mohammed al Fayed, recently upset football fans by telling them they could ‘go to hell’ if they didn’t like the recently erected Jacko statue outside the clubs home ground.

Madonna and Child will be displayed at the East London studio until May 1.