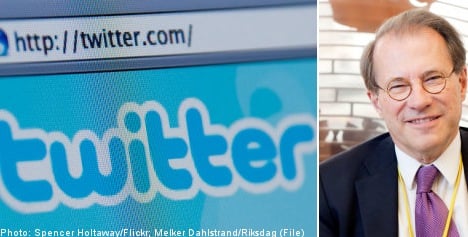 Speaker of the Riksdag Per Westerberg of the Moderate Party believes that members of Sweden’s parliament need to find a consensus on the issue according to a “gentlemen’s agreement” among members of any given committee.

“I think there it’s a public opinion challenge to start setting rules that reduce insight into the work of the Riksdag,” Westerberg told the TT news agency.

On Thursday, Moderate Party MPs accused colleagues from the Social Democratic, Left, and Green parties of having invited the far-right Sweden Democrats into negotiations.

The accusations were made public in a comment posted on Twitter following a meeting of the labour committee, and caused an uproar among the centre-left opposition parties.

Social Democratic group leader Carina Moberg told TT that she “at the first best occasion” planned to take up the issue of tweeting during meetings with group leaders from the other parties in the Riksdag.

Moberg added that, despite several reports in the Swedish media, she did not want to ban MPs from tweeting. Rather, she explained that elected officials must still respect that some committee meetings are closed.

“The important thing is that the committees discuss this amongst themselves. We don’t need more rules, just common sense,” she said.

Thursday’s incident wasn’t the first time that MPs’ use of the popular microblogging site during official meetings has sparked controversy.

In March, Sweden Democrat MP Kent Ekeroth was slammed for tweeting from a closed meeting of the Committee of EU Affairs.

“Committee meetings take place behind closed doors, but one should be clear that members don’t have a duty to maintain professional secrecy. They only have that when it comes to matters of national security, or if it’s something serious related to inter-state relations,” Westerberg explained.

The Riksdag’s Committee on the Constitution, for example, has an agreement that members give up their mobile phones during meetings in order to avoid leaks of sensitive information. The arrangement is totally voluntary, said Westerberg.

The use of Twitter is a common occurrence in the Riksdag. During debates in the main chamber, a parallel debate is often conducted on Twitter, said Westerberg – something which he doesn’t consider to be a problem.

“As long as it doesn’t cause any disruption in the chamber, there’s not much to discuss,” he said.

However, Westerberg refused to go into the ethical problems which can crop up when MPs tweet about other MPs or political parties.

“The views I have on the matter I’m going to save for a discussion with the group leaders,” he said.

The question of Twitter habits in the Riksdag is set to be discussed at the next group leader meeting, scheduled to take place in two weeks’ time.