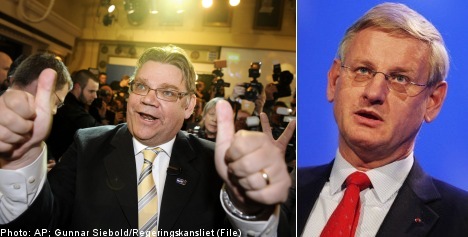 In a blog post entitled “Finland’s business and the Nordic countries”, Bildt concluded that the election success of Perussuomalaiset or the “True Finns”, on an anti-immigrant, anti-EU platform presented a challenge for Finland and its relations with the region.

“A Finland which turns its back on both the Nordic countries and Europe would be another Finland. I don’t think it will go this far though. The other major parties have a clear line on these important issues,” he said.

Carl Bildt furthermore highlighted the cause of the Swedish minority in Finland.

“From a Swedish perspective there is reason for concern over the tone adopted by the party against the Swedish minority,” Bildt added.

The Local reported last week that the European Council had expressed concern over the status of Swedish as an official minority language in Finland.

The True Finns support the abolition of bilingualism and an end to Swedish as a compulsory subject in schools.

Sweden-based political scientist Nicolas Aylott told The Local on Monday that the Finnish political party system will now have to take account of eurosceptic feeling within society.

“In the future we are unlikely to see Finland in the vanguard of those pushing for closer integration, such as on fiscal policy. Finland as the ultra euro enthusiast may have gone, but radical change, such as pulling out of the euro, is highly unlikely.”

Aylott said that the immigration issue and anti-Islam stance of the Danish People’s Party and Sweden Democrats, has not been as prevalent within the Finnish political discourse, arguing that the True Finns’ success has more to do with the EU.

“Finland has uffered from the downturn, but it is not Portugal, Ireland or Greece. The bail outs have struck a nerve though in a way that they haven’t in Sweden – perhaps because Finland is a member of the euro.”

He added that the leadership of Timo Soini is also a key factor behind the True Finns’ success.

“These populist charismatic leaders don’t come around that often – those who prescribe simple solutions to complex problems and make them seem relatively plausible.”

Carl Bildt meanwhile reserved praise for the conservative National Coalition Party which became the largest party with 20.4 percent of the vote, ahead of the Social Democrats on 19.1 percent and the True Finns on 19 percent up from 4.1 percent in 1997.

“For the National Coalition Party the election result is an achievement after it had taken clear responsibility for tough national and European decisions that were hardly vote winners,” he said.

The biggest loser in the election is the Centre Party, which led the previous government through a tough economic period for the country, and which lost 7.3 percentage points to poll 15.8 percent.

With the election results so tight, there is expected to be a considerable delay before Finland is able to announce its new government, but it is expected that Jyrki Katainen of the National Coalition Party will lead the process.

The Swedish language Hufvudstadsbladet devoted its leader article on Monday to presenting a summary of the Finnish newspapers, who in unison agreed how difficult the negotiations for a new government will be.

The newspaper identifies one of the key points of conflict to be the bail out of crisis-hit eurozone countries, with the National Coalition Party in favour of Finnish support, while the True Finns and the Social Democrats are opposed.

The challenge for the True Finns will be appeasing its grassroots while being forced to make compromises as part of a coalition government, several newspapers wrote, drawing parallels to the 1970s and the break up of the Finnish Rural Party.

The True Finns were founded in 1995 following the dissolution of the Finnish Rural Party. The party combines left wing economic policies with conservative social values with a tendency to hold immigrant communities and immigration policy to account for the country’s ills.

The party has been compared with the likes of the US Tea Party movement and other nationalist populist movements across Europe, such as the Sweden Democrats.

Sweden Democrat leader Jimmie Åkesson in a statement on Monday declared his “happiness” over the Finnish election result, expressing a hope that the True Finns stand against “mass immigration” would have an effect on the Swedish debate.

The leader of Sweden’s Social Democrats, Håkan Juholt, meanwhile explained the success of the True Finns as an expression of “fear”.

“The success of the True Finns, primarily in the countryside, is a result of people seeking simple answers to complex problems and are afraid of the future,” Juholt said in a party statement.