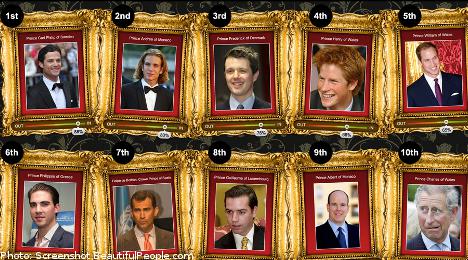 The website BeautifulPeople.com describes itself as “an exclusively beautiful community” and promises that they wont be ”filtering through unattractive people” on their pages.

The site argues that it is “fair and democratic”, letting its members decide on an applicant’s appearance and is founded on the “very basic principle of human nature – that is, romantically, people want to be with someone they are attracted to”.

In keeping with its modus operandi, the site canvassed its members to cast a critical eye on the comeliness of the world’s assorted royals through the ages.

The Local has previously reported that Swedish men have fared well on the website and true to form, Sweden’s Prince Carl Philip has been voted as the most beautiful royal male of all time by a pool of some 127,000 “subjects”.

Carl Philip heads the list followed by Prince Andrea of Monaco, Prince Frederick of Denmark and princes Harry and William of Wales.

The late Princess Grace of Monaco claimed the top spot in the list of beautiful royal women, followed by Queen Rania of Jordan, Prince William’s bride-to-be Kate Middleton, the late Diana, Princess of Wales and Princess Charlotte of Monaco.

Princess Madeleine, third in line to the Swedish throne, came in at seventh ahead of Crown Princess Mary of Denmark.