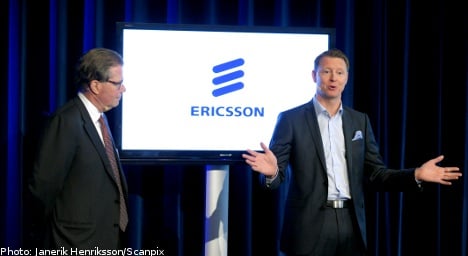 From January to March, the company recorded group net profits of 4.1 billion kronor ($675 million), up from 1.26 billion kronor for the same period in 2010.

The figure was higher than the three billion kronor which analysts consulted by Dow Jones Newswires had expected.

“Group sales in the quarter increased by 17 percent year-over-year driven by continued strong demand for mobile broadband and especially for the multi-standard radio base station RBS 6000,” said Hans Vestberg, president and chief executive officer of Ericsson.

“Sales in the first quarter were not impacted by the devastating earthquake and tsunami in Japan,” Vestberg said.

The company’s supply chain of components had been partly dependent on Japan, which had caused some delays, he said.

“We have taken a number of actions to mitigate the effects to secure that we limit the impact on our customers,” he added.

These measures include finding and integrating alternative components in our products as well as increasing volumes with second source suppliers, the firm advised.

The firm continued to claim market share within 3G networks and maintained its control of over 50 percent of the market for 4G/LTE.

Ericsson’s mobile phone joint venture with Japan’s Sony meanwhile saw its first-quarter sales, reported earlier this month, fall 19 percent to 1.1 billion kronor and was “experiencing some disruptions in its supply chain from the earthquake in Japan.”

And its other joint venture, wireless technology company ST-Ericsson, saw its sales plunge 27 percent during the quarter to 444 million kronor, which was a steeper drop than expected.

The decline was expected to continue in the second quarter, “due to the ongoing decline in legacy products,” as ST-Ericsson continues its shift to new products, Ericsson said, adding it was “committed to financially support ST-Ericsson’s execution of their new portfolio.”