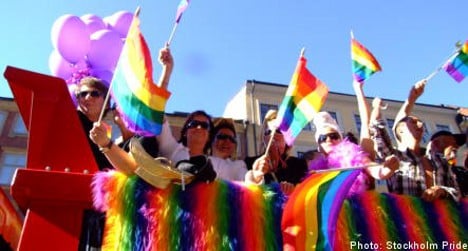 The party’s Stockholm district committee has decided the time has come for a formal Christian Democrat presence and has informed the party hierarchy of its plans.

“The district committee has unanimously decided that we should have our own tent and a seminar about LGBT refugees,” said Christian Democrat MP and Stockholm district chairperson, Caroline Szyber, to the Svenska Dagbladet (SvD) daily.

While the party took part in a seminar at last year’s event, 2011 will be the first time that it has its own tent at the LGBT festival which will be based in Stockholm’s Kungsträdgården between August 1st-7th.

At last year’s festival, held in the run up to the general election, all the parliamentary party leaders were invited to take part in a debate concerning LGBT (Lesbian, gay, bisexual, transgender) issues. All accepted except Christian Democrat leader Göran Hägglund.

The party was the only one without a tent and the only one not represented in the Pride Parade, the traditional main event which typically attracts over 500,000 participants and spectators.

Caroline Szyber was one of the arrangers behind last year’s seminar which was on the theme of “growing up, building a family and growing old as a homo, bi, trans or queer”.

“A presence at Pride is a way of meeting this group… It takes time to win a confidence, and here we have a greater uphill struggle than the other parties,” she told SvD.

Stockholm Pride is one of the city’s largest festivals and is the largest Pride celebration in the Nordic region. It has been held in the city since 1998 and will this year open on August 1st and run until August 7th.