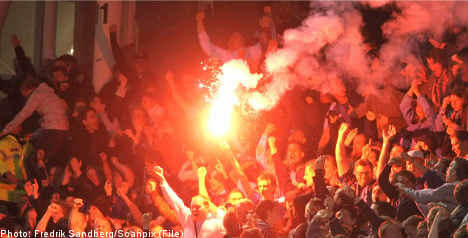 It used to be dubbed “The English Disease” but while the problem of football hooliganism has all but disappeared in the UK, it has turned into something of hot-button political issue in Sweden.

During the match, played in Syrianska’s home stadium, an official was hit by a firework, forcing the match to be abandoned.

A great deal of finger pointing followed, as various factions searched for answers as to who or what may have led to the incident.

The Swedish footballing community is well aware of the problem.

A survey carried out in October 2010 by Sweden’s TV4 revealed that every fifth Swedish football player, almost every third Allsvenskan club official, and every other referee, has been subjected to threats or harassment.

According to a Gothenburg University social psychology researcher Tore Brännberg, being a supporter of a football club in Sweden is comparable to being part of a religious sect.

“When they think that something has gone wrong they have to act,” he told TV4 at the time.

Depressing in its predictability, there is a growing feeling that it is only a matter of time before someone, either on the pitch or in the crowd, is fatally injured at a football match in Sweden.

There have been endless debates and column inches devoted to the subject in recent days, but many questions remain. Why does it still go on? Who will take responsibility and what can actually be done?

“It is a complex issue and too easy to simply compare the situation with England and try to replicate things,” Victor Capel, chairman of the Swedish Football Supporters Association tells The Local.

While many believe that the best way forward is to copy the English methods that have eradicated the worst of the problems, finding the right answer for reducing violence at Swedish football stadiums may not be so simple.

“For a start, the Swedish and English cultures are very different, and a solution there would not necessarily work over here. We need a complete change in mindset, because we have been discussing the same thing for over 30 years,” Capel adds.

He cites tragic events involving supporters of UK club Liverpool in the 1980s in which dozens of fans died and hundreds were injured as being a major catalyst for change in Britain.

“It was more urgent and, in a sense easy, for the government to take a hard line then. We have had our problems but nothing as serious as that,” says Capel.

While there have been a number of violent clashes between football rival football supporters in Sweden in recent years, none have turned deadly.

In 2004, 27 hooligans were convicted for rioting in connection with a derby between Stockholm clubs AIK and Hammarby.

Around 100 fans were involved in a brawl in Helsingborg in 2007 between the hometown club and visiting Hammarby.

And in 2009, a supporter from Stockholm-based Djurgården stormed the pitch following the teams home win over Syrianska and decked one of the opposing players with a close-fisted punch.

Nevertheless, successive governments in Sweden have continually dragged their feet on the subject, however, and there is an overwhelming feeling that all those involved in the argument are busier trying to pass the buck than finding workable solutions.

Current sports and culture minister Lena Adelsohn Liljeroth believes that the governing body of the game should be doing more.

“They (The Swedish FA) should be taking a more active role. They are, after all the ones coordinating the game,” she told the Expressen newspaper.

Unsurprisingly, her view not shared by Lars-Åke Lagrell, chairman of the Swedish FA.

“Football is not capable of taking care of the criminal elements on its own. Therefore, we want the government to act,” Lagrell told the Dagens Nyhter (DN) newspaper.

“We work every day with the issue, and we can certainly do better, but in this case, the politicians need to help us with tougher legislation. They have got to act before someone dies in a football stadium.”

Capel sympathises with both sides, but explains that part of the issue is making better use of tools already available.

“There are laws in place but they need to be firmly applied,” he says.

“Throwing fireworks onto a football pitch is classified as grievous assault, which carries a maximum 10-year prison term. The laws are there already, they just have to be applied.”

The government has advocated a membership scheme, whereby clubs can control whom they let into the football arenas, and if trouble has occurred, making it easier to pick out and punish the guilty parties.

It is hard to see this working in practice though, as a membership scheme by itself will not necessarily catch the perpetrators of violent acts.

While it is one thing to identify hooligans, it’s quite another to prove they are causing trouble and actually make an arrest.

The membership system would also raise problems from a financial perspective.

“Swedish football doesn’t have the money to invest in something that will make it harder for fans to watch the game. A membership scheme will just put people off going,” says Capel.

The police have also come in for criticism, although Capel feels they do a reasonable job under difficult circumstances. More resources and training, as well as more supporter-police could have a big effect, he claims.

Capel’s organisation believes that part of the solution lies in dealing with things on a smaller scale.

“We need to work together to look for the simplest solutions to specific problems. If people are angry, why are they angry? Are the queues too long? Are the facilities or service good enough?” he explains.

“These things can be dealt with, then you can go into why young men want to fight, why Swedes drink so much.”

Capel cites AIK’s home around Råsunda, located in the north Stockholm of suburb of Solna, explaining the plethora of stones nearby which are easy to pick up and throw.

“Move the stones away and you remove the problem. I think the various authorities feel helpless in the face of the large overall picture, which is difficult to address,” he says.

“If referees are hit by objects, then put up netting (this is incidentally a measure favoured by referees). It can be that straightforward.”

A crucial argument often ignored when it comes to membership schemes is that, although violence in stadiums is rare in the UK, it is often because sets of fans wage war on each other far away from the grounds themselves.

Football violence hasn’t gone away in England; it has just found a new venue, regardless of any membership system and bans.

For similar reasons, other suggestions like electronic tags and forcing fans to report to police stations on match days may provide temporary relief but they will not stop rival gangs of fans wanting to square up wherever and whenever they like.

Similarly, another proposal, to insist on membership for the under 27s only may also be unworkable, judging by experience from the UK, where it is often the 40+ age group, with good careers and families, who are the ones orchestrating the violence.

“The various parties, the police, politicians, the clubs and the fans themselves, need to accept responsibility and do what they can do and what they should be doing,” concludes Capel.

“This isn’t about solving the problems of the world. Sometimes it just takes general will to realise that sometimes the easiest solutions are the best ones and act accordingly.”