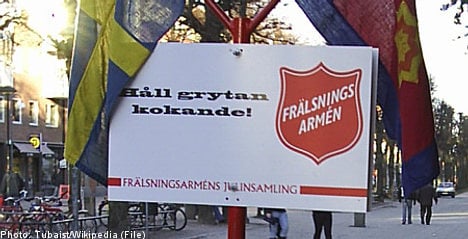 An undercover journalist from Swedish TV4’s Kalla Fakta (‘Cold Facts’) investigative news programme used a hidden camera to record his conversation with a leader from one of the country’s Salvation Army (Frälsningsarmén) chapters.

“The Salvation Army’s basic position is that homosexual sex is a sin. A man shouldn’t sleep with a man in the way he sleeps with a woman,” the chapter leader told the TV4 reporter in a programme broadcast on Sunday evening.

Another chapter leader asked God to help free the reporter from his homosexuality.

In an email to TV4, Salvation Army representatives said the exchange was likely due to “a few personal views from a few chapter leaders”.

In subsequent email messages, Kalla Fakta pressed the Salvation Army to explain why the Junior Soldier’s Promise lesson book includes passages saying that children and young people should learn that homosexuality is wrong.

The Salvation Army responded that the material is “outdated in its entirety and is in the process of being reviewed and updated”.

The document was changed this year and no longer includes the text about homosexuality.

Christian Democrat Stefan Attefall, the government minister responsible for deciding which faith communities in Sweden receive grants from the state, doesn’t see the incident as cause to re-examine the government’s support of the Salvation Army.

“All religious communities undoubtedly have opinions and live style requirements that you and I perhaps don’t agree with. But to review communities’ theological views, yeah, well, then we can’t have any support at all,” said Attefall.

In a statement on its website, the Salvation Army accused TV4 of “doing investigative journalism a serious disservice”, arguing that the report didn’t reveal anything that wasn’t already known.

Had reporters asked directly whether or not people who “live a homosexual lifestyle” are allowed to be in the Salvation Army, they would have been told no because we interpret the Bible, which defines sex as something that should happen in a marriage and is something between a man and a woman”.

The Salvation Army added, however, that the organisation welcomes everyone to receive help or be a member, regardless of their lifestyle.