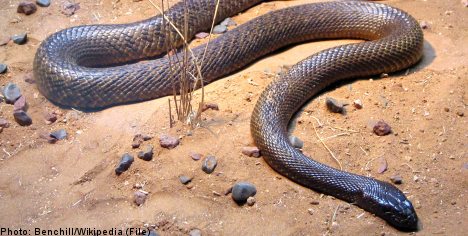 According to a note posted two months ago in the building’s entrance, the 1.3 metre long snake, an Inland Taipan, escaped from its owner, receiving intense media interest at the time.

The Inland Taipan, also known as the Small Scaled Snake, is native to Australia and is known as one of the world’s most poisonous snakes.

After a two month hunt for the snake that has proved fruitless, the conclusion has now been drawn that the whole episode was a hoax; a hoax that has incurred substantial cost.

According to the building’s caretaker, Thomas Marot, all indications point to the fact that there was never a snake on the loose and he told the Aftonbladet daily on Tuesday that more than 100,000 kronor ($15,900) has been spent in the meantime.

The offending note described the predator as “a teenager” which hadn’t yet fully developed its venomous potential, and urged anyone who may have seen it to contact a veterinarian or emergency services.

Residents in the building in the meantime took no chances and shored up their ventilation ducts and placed heavy books on their toilet seats, among other precautions.

The intensive search for the snake has also included the employment of dedicated snake hunters who have been scouring the vicinity.

Jonas Wahlström from the Skansen animal park in Stockholm was however one of the first to warn that the tale seemed highly improbable.

“The Inland Taipan is found in only one place in Sweden and that’s at the Skansen vivarium. They are incredibly poisonous so they aren’t especially popular as pets,” he told Aftonbladet in April.