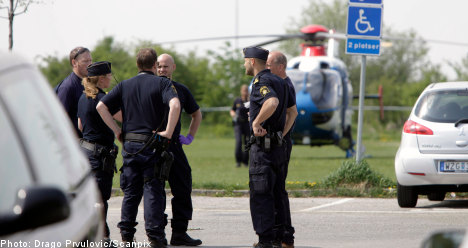 “It is rather a gruesome sight. The man is on all fours, it looks like an execution,” witness Tomas Johansson, who arrived on the scene minutes after the shooting, told the TT news agency.

The victim, believed to be in his mid-thirties, was just about to get into a car parked near the Sibbarp campground when he was suddenly shot dead by an unknown perpetrator, who had reportedly been lying in wait for him.

“He was hit by three bullets to the head,” a witness told daily Aftonbladet.

Witnesses stated that the man fell to his knees between two parked cars.

The perpetrator is said to be a twenty-something male, dressed from head to toe in black, according to witnesses.

After the shooting he ran towards the campground. At one point he dropped his weapon, but stopped to pick it up, witnesses reports.

Two areas have been cordoned off by police; one immediately next to the dead man and another about 300 metres away from the body.

A large number of police with dogs are searching for the shooter and a helicopter is circling the area.

Police are also interviewing witnesses on the spot.

“We have about 15 patrol cars on the scene to try to get an idea of what exactly happened. There were quite a lot of people about,” Calle Persson of the local police told the Kvällsposten newspaper.

In addition, police are working to identify the victim and a forensic investigation of the area is being carried out. Police used sniffer-dogs specially trained to find weapons and cartridges.

Britt Strömbäck, the manager of the bathing area, was about 150 metres away from where the man was shot dead.

“I heard three muffled bangs and then suddenly there were police and ambulances on the scene. There was a pre-school group playing a little further away, the sun was shining and everything was peaceful,” Strömbäck said to Kvällsposten.

The police have confirmed that the man died from the gunshots, but are unwilling to disclose how many shots were fired and if they have found any empty cartridges in the vicinity of the body.

“We are close to determining who he is, but we’re not quite there yet, ” said Marie Persson of the local police to reporters during a press conference two hours after the incident occurred.

Four hours after the shooting local police searched a nearby house, but no suspects were apprehended.

“We are not ruling out that there was more than one involved in the crime,” said Calle Persson to Aftonbladet.

The victim was known to the police and they are currently looking into his background for any potential leads to the investigation and a motive for his execution-like demise.

The incident has been classified as murder.