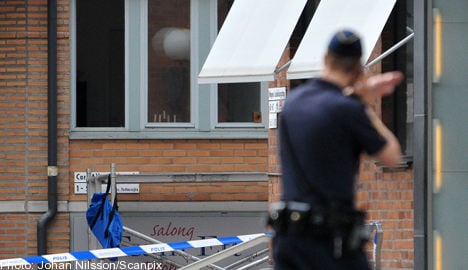 According to a witness who was working across the street, the robbers entered the shop with the help of portable scaffolding.

“They were wearing masks and kitted out as house-painters. I thought they had come to remove graffiti,” said witness Stig Hagström to daily Expressen.

The two robbers then climbed up on the scaffolding and entered the shop through an upstairs window. When one of them brandished a gun, Hagström guessed they were no ordinary painters.

“I ran straight into the reception area of my office where we have a security guard and asked him to call the police, “ Hagström told Expressen.

CEO for owner company Guld Invest, Thomas Jansson, had been out to get some coffee and upon his return he found the shop being robbed. To enter the shop visitors must first be filmed on the security cameras and he was surprised to find that the door didn’t open to him at first.

“When I was finally let in, it was the robbers that opened the door. They pointed a gun at my chest. It was completely unreal,” he said to news agency TT.

Inside he saw several employees lying face down on the floor. The atmosphere was agitated and many were openly crying. No one dared move as the robbers shouted ‘don’t open the door – we have placed a bomb outside’ after they pushed passed Jansson and ran out.

When the police arrived on the scene a bag was found hanging off the door and the area was cordoned off until technicians finished examining the bag for explosives.

Another object was reported hanging from scaffolding in the nearby area later on in the day, and police believe this was another evasive manoeuvre by the robbers.

“It is enough that they claim to have planted an explosive device to give them time to escape from the area,” said Ulf Lindgren of the Stockholm police to TT.

The police have started their preliminary investigation into the crime, which has been classified as aggravated robbery.

According to Thomas Jansson it is difficult to say just how much gold the robbers got away with. The shop often handles gold to the value of 10 million kronor ($ 1,6 million)

“We don’t know exactly how much is gone but it must have been a considerable amount. They had picked the shop clean,“ he said.