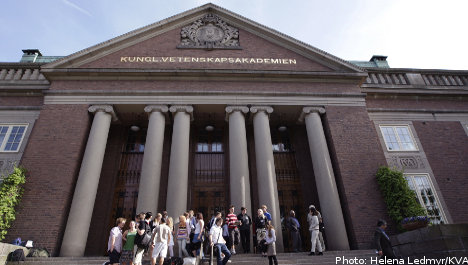 “It’s a civil court case to see whether we’ve breached our relations” with the planet, “and to see how to restore that relationship,” symposium chair Johan Rockström told reporters at the Royal Swedish Academy of Sciences.

The “trial” will be one of the sessions at the third biennial Nobel laureate symposium on global sustainability — a three-day event that opened in the Swedish capital Tuesday.

In addition to the Nobel laureates, leading scientists and environmental research group heads were on site to draft a Stockholm Memorandum on the findings of the meeting, which will be presented Wednesday to the United High-level Panel on Global Sustainability.

Rockström explained that one of the sessions had been shaped as a trial since “we’ve come to the point where just another meeting with another dialogue would fail to have an impact (and to clearly) communicate … the possibilities and challenges we are facing.”

“History will in any case judge us,” Swedish Environment Minister Andreas Carlgren told reporters, explaining the “trial” was actually about humanity judging itself with future generations in mind.

Mario Molina of Mexico, the winner of the 1995 Nobel Chemistry Prize who is a science and technology advisor to US President Barack Obama, told the news

conference he hoped rationality, common sense and wisdom would strengthen the planet’s case in the “symbolic” trial.

At the conference’s inaugural speech, Sweden’s Crown Princess Victoria stressed the urgency of acting to make the world a better place.

“Mankind faces tremendous challenges if we are to hand our future generations a healthier mother earth, … a planet more sustainable than it was when we received it from our parents,” the princess said in a speech inaugurating the symposium.

“I see no better persons than Nobel laureates to carry this message to the world,” she told the delegates.

The princess and delegates were welcomed at the Royal Swedish Academy of Sciences by a tiny group of protesters.

“Manmade climate change is an unproven, unscientific political ideal… If we implement what these people are saying, billions of people are going to die of poverty,” said protestor Hussein Askary

The Stockholm Memorandum will be considered by the UN panel, which was appointed by UN Secretary-General Ban Ki-moon and includes South Africa’s

tasked with putting together a “new vision” on sustainable growth.

The panel will draw up a report with suggestions before the UN Conference on Sustainable Development in Rio de Janeiro in 2012.