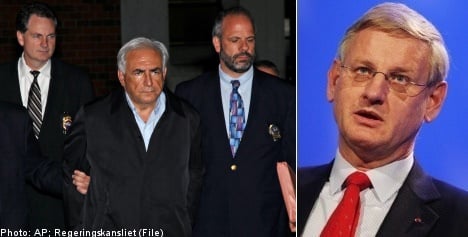 “The IMF is a rather solid body… I don’t see damage coming out of that,” Bildt told reporters, referring to allegations Strauss-Kahn sexually assaulted a maid at the posh Sofitel Hotel in New York last weekend.

Speaking at a joint news conference in Stockholm with Australian foreign minister Kevin Rudd, Bildt refused to say whether he thought Strauss-Kahn, who is being held at New York City’s notorious Rikers Island jail complex and faces a long prison sentence if convicted, should resign.

Strauss-Kahn, whose official IMF mandate ends in 2012, has denied the claims.

Bildt’s comments echo those of Sweden’s finance minister Anders Borg at a meeting of European finance ministers in Brussels on Monday, called to discuss financial support to Portugal and Greece.

“It is clear that it complicates the process that the IMF does not have a working head at the moment,” Borg said before the meeting.

“But I assume that this is something can be handled, even if it occurs just at the time of this meeting. I do not think it will complicate efforts by Portugal, Greece or Ireland in an decisive way.”

US treasury secretary Timothy Geithner meanwhile insisted on Tuesday the 62-year-old Frenchman was “obviously not in the position to run the IMF”.

Kevin Rudd meanwhile also stressed Wednesday that the IMF was “a robust institution.”

“The IMF is no longer just a creature of Western economies. Therefore it continues to play a significant role,” he said.

Both Rudd and Bildt emphasised the important role the institution had to play in Egypt, where authorities last week requested an IMF loan to help cover a financing shortfall of up to $12 billion dollars through next June.

The IMF said Friday it would send a team to Cairo “shortly” to discuss conditions for the aid.

The Egyptian economy, heavily dependent on tourism, has been battered after a pro-democracy uprising that began in January ousted long-time president Hosni Mubarak.

“Stability in the Egyptian economy is very important for the evolution of democracy there,” Bildt said.