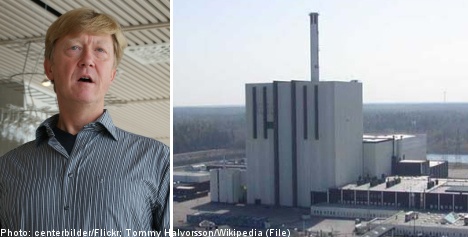 “To focus so strongly on which year nuclear power is to be wound down raises the risk that the key issue is missed: how are we to meet the dual challenge of both cutting nuclear power dependency and of climate emissions,” Carlgren told the TT news agency, adding that he is glad that in Sweden the notion of a fixed deadline has been discarded.

Germany announced late Sunday that it plans to wind down its nuclear power capacity by 2022 after Angela Merkell’s coalition government was able to agree on a timetable.

Germany currently produces 87 percent of its electricity needs from fossil fuels and the remainder from nuclear and hydro power. Carlgren expressed concern over how Germany would be able to make up the shortfall.

“The decisive issue for Germany now is that it is highly likely that it will increase imports of nuclear generated electricity from France and that it will risk not being able to ease dependency on fossil fuels – primarily of coal power,” he said.

The decision to discontinue nuclear power has come after a prolonged debate in Germany following the Japanese nuclear catastrophe in March and the country thus becomes the first industrialised nation to take the step.

Germany’s environment minister Norbert Röttgen confirmed that the seven older nuclear reactors which were immediately taken out of service after the problems at Japan’s Fukushima nuclear plant, will not be restarted.

One of the main firms operating within the German nuclear power sector is the subsidiary of Swedish state-owned firm Vattenfall. Germany is Vattenfall’s largest electricity market in Europe.

Carlgren played down the significance for Vattenfall, and was instead keen to focus on how the company and Sweden should meet the energy needs of the future.

“The most important issue is how fast we can expand the construction of renewable energy,” he told TT, adding that in 20 years he hopes that Sweden will draw two-thirds of its electricity supplies from renewable energy sources.

The Local reported in March that the Fukushima nuclear disaster had also had an impact on Swedish support for nuclear power. A Sifo poll at the time indicated that 64 percent of Swedes were against the construction of new nuclear facilities.

Sweden generates 50 percent of its electricity supply from 10 reactors at the three power stations – Forsmark, Ringhals and Oskarshamn – currently in commercial operation.