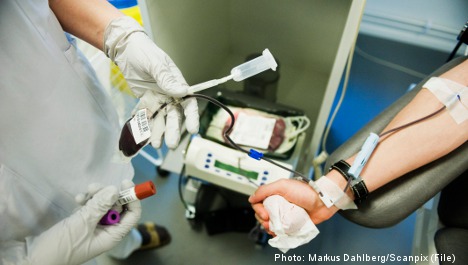 This is significantly stricter than previous rules about piercings and tattoos. These stipulated that potential donors who have got a tattoo or piercing themselves must wait 6 months before giving blood again.

The new rules are an adaptation to EU’s rules for blood donors, and work to protect patients in need of blood from jaundice, as well as other blood transmitted diseases.

At the same time, tightening rules and making blood donation trickier may discourage several potential blood donors. Donation centres are concerned that the new EU rules will lead to fewer donations, at a time when blood is already scarce.

Sweden is already far behind neighbouring country Denmark in blood donations per capita. Sweden has 54 donors per 1000 inhabitants. The same figure in Denmark is 74.

“We’re worried that this will make recruiting young people more difficult. And nowadays people get tattoos their entire lives, not just when they’re young. So yes, we’re absolutely worried that the new rules will cause problems for us,” Ingrid Johansson, blood donor coordinator in Skåne, told SVT Rapport.