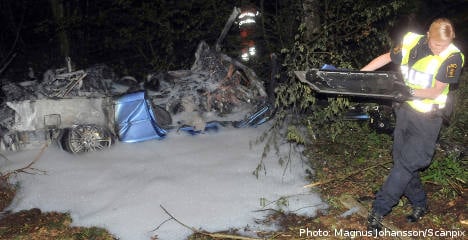 “But we can’t tell anything about their sex or age.”

The police have yet to identify the deceased. What type of car was involved in the accident has also been impossible to confirm, as the number plates are scorched.

“It’s not even possible to tell what brand the car is. All we know is that it’s a car,” Ginghagen said to news agency TT.

Another unanswered question is if there might have been survivors to the crash.

Thomas Ginghagen told the news agency that a police patrol saw the car, driving at high speed. The police officers turned their police car around and began a pursuit of the offending vehicle, which disappeared out of sight.

The patrol caught up to the car around 2.30am, directly after the accident occurred.

“The police officers saw that the car, which had gone off the road and collided with a tree, was on fire. They tried to put the flames out with a powder extinguisher,” Ginghagen explained.

Soon afterward the Karlskoga fire department arrived and successfully extinguished the fire, but too late.

“The car was completely burnt out,” Ginghagen said.

The four bodies were taken to the morgue at the local hospital. Their identification will be a matter for detectives.

The police do not suspect any crime has been committed in connection with the accident.