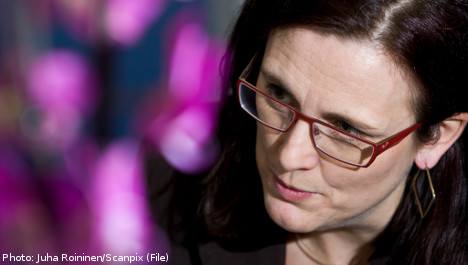 Four out of five EU citizens consider corruption to be a problem in their country.

Malmström on Monday tabled a number of suggestions to combat the growing problem of corruption within the EU, reports national radio station Sveriges Radio.

“The percentage of money that disappears, through bribes and corruption, within the EU is as high as the entire common EU budget – in other words, one percent of EU’s total BNP,” a concerned Malmström said to Sveriges Radio.

The commissioner suggests developing a new system for monitoring and judging how well EU member countries work against corruption, pointing out that with today’s system, many European leaders have no interest in fighting bribery.

One of her suggestions is that the union implement “naming and shaming” – pointing out EU members who are not behaving well enough.

“Making a ‘naming and shaming’ list alone won’t make much difference,” Malmström points out. “But enforcing it with concrete consequences can make it a useful tool.”

Malmström will be presenting a new EU bill later this year, about freezing assets that have been acquired through corruption.