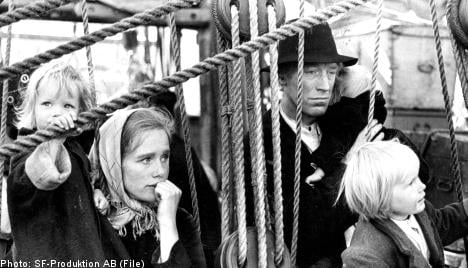 Wild myths that solve the mysterious birth of language and its dispersal often include floods, catastrophes or punishment by the gods.

In Hindu stories it was a tree being humbled, in North American Indian folklore it was a great flood, in east Africa it was starvation-induced madness, in the Amazon it was stolen hummingbird eggs and in aboriginal Australia it was a goddess’ gift of play for children.

Regardless of how language really sprouted and then diversified, it is certain that it is not a static or fixed phenomenon.

As the world witnesses an era of unparalleled change and transformation, the question of how languages evolve as words are invented, borrowed or dismissed, becomes ever-more relevant.

To that end, a group of five Swedish researchers are set to spend more than a week in Minnesota, a northerly mid-western state known to be a part of the heartland for Swedish-American communities, to conduct interview with anyone they can find who speaks Swedish.

The researchers are hoping their efforts will help shed light on how the languages spoken by Swedish migrants a century ago has evolved over the decades of being spoken on the prairies of the Midwestern United States.

“When people move abroad and have contact with English in their every day, it begins to affect how their native language is spoken, especially across generations,” says Jenny Nilsson, a member of the research team from Gothenburg’s Institute of Language and Folklore.

“We are interested in how the two languages, Swedish and English, have affected each other and how the Swedish language has changed over time.”

The team will compare their findings to an extensive study carried out in the 1960s and 1970s when two Swedes spent almost a year travelling the US by bus.

The men recorded more then 600 Swedish speakers throughout the country that included first generation Swedes up to third generation.

“They were lucky because they were able to speak with the first Swedes who emigrated to the United States in the late 1800s – they were still alive. And to hear how they spoke after living there for a few decades, well that’s really cool data if you’re into this,” Nilsson says.

During a fifty-year span that began more than 100 years ago, a tidal wave of Swedes, amassing to about 1.3 million, left a country plagued with hardship for the shores of opportunity in the United States.

The mass emigration of Swedes for the United States was depicted in the 1971 epic film ‘The Emigrants’ (Utvandrarna), staring Max von Sydow and Liv Ullmann (pictured above), and based on a series of novels penned by Swedish author Vilhelm Moberg in the 1950s.

The American frontiers, with their inexpensive and fertile land in the Midwest, were a magnet for the poverty-stricken Europeans who were drawn to reports of its earthly paradise, political and religious freedoms and limitless opportunities.

The migration throng reached its peak in the years following the Civil War and by 1890 the US Census reported a Swedish-American population of nearly 800,000.

By 1910, Chicago had become the Swedish-American capital, with more than 100,000 immigrants making it the second largest Swedish city in the world, next to Stockholm.

In fact, the rising Swedish exodus triggered a national alarm back at the Baltic Sea.

In the early 1900s Sweden instituted a parliamentary emigration commission that later advised extensive reforms to reduce emigration by ‘bringing the best sides of America to Sweden.’

Nowadays, according to a US Census report in 2000, about four million Americans claim to have Swedish roots.

The true number is thought to be considerably higher, and self-identified Swedish Americans in the US are expected to soon outnumber the nine million Swedes in Sweden.

Minnesota remains by a wide-margin the state with the most inhabitants of Swedish descent—9.6 percent of the population as of 2005.

The ongoing rush of new words into the English language makes it a rich field for investigation into language change, despite the difficulty of defining precisely and accurately the vocabulary available to speakers of English.

Throughout its history, English has not only borrowed words from other languages but has re-combined and recycled them to create new meanings, whilst deleting out-dated words.

During their upcoming journey to the United States, the researchers, who either come from the Institute or the University of Gothenburg’s Swedish Language Department, will set out to interview and record as many Swedish speakers as they can find, talking about everyday life.

“We will listen to how they pronounce words, structure sentences, choose words and to how much English is mixed in,” says Nilsson.

For example, the phrase ‘to sit on the fence,’ in regards to having difficulty making a decision, is often translated and used in the US by American-Swedish speakers as ‘sitta på staket,’ but in true Swedish, this phrase can only be interpreted literally, explains Nilsson.

Other such findings include the Swedish word långsam, or slow, which has been substituted for lonesome instead of the accurate Swedish term ensam.

Nilsson agrees that it’s easier today for people to maintain contact with the language through online news sources, buying Swedish books, listening to Swedish music and online chats, all things unavailable to the first few generations.

She and her other US-bound colleagues will compare their findings to that of the data collected during the previous decades and will use it to determine new leads that further their research.

“We have no idea what we’ll find. I would think the variation in Swedish is even greater today after ten to fifty years has passed,” explains Nilsson.