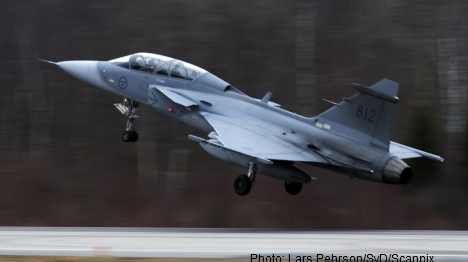 “These transactions have never entered into the accounts,” says Saab’s President and CEO Håkan Buskhe.

Buschke became the Saab CEO in 2010 and claims that Saab has a zero-tolerance policy towards irregularities.

“Our internal investigation and openness in this matter demonstrates how seriously we regard this,” Buschke said in a statement.

Saab announced the probe following an investigative news programme on commercial TV4 said it had new evidence of corruption connected to Saab’s 1999 deal to sell 28 — later reduced to 26 — JAS Gripen fighter jets to South Africa earlier in the spring.

The programme published what it claimed to be a 2003 contract between Saab subsidiary Sanip and Fana Hlongwane, the advisor to the South African defence minister at the time promisisng to pay him millions of euros in bonuses if South Africa did not back out of the Gripen deal.

The document showed Sanip had agreed to pay Hlongwane over 50 million kronor ($7.9 million) between 2003 and 2005, and that a further 30 million was scheduled to be paid later this year.

But according to Saab it was BAE systems that made these payments, through Saab-owned Sanip, but completely unbeknownst by Saab.

“A person employed by BAE Systems has without Saab’s knowledge signed a for us unknown contract, signed for us up until now unknown transactions as well as signing the audited and apparently inaccurate financial statement for 2003,” Buschke said in Thursday’s statement.

Saab has handed all the materials over to Chief Prosecutor Gunnar Stetler at the Swedish National Anti-Corruption Unit on Saab’s behalf.

Stetler told news agency TT that he has received rather an extensive body of material from Saab which he will now begin reviewing.

“I am counting on being done sometime the week after next,” he said,