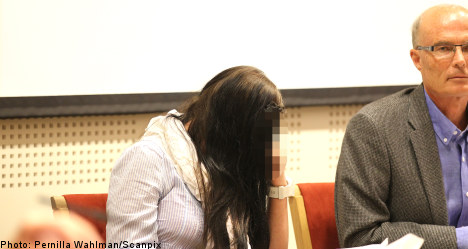 The 20-year-old murder suspect hides her face in court

The brutal assault and death of school teacher Tommy Johansson has received a great deal of attention in the Swedish media.

Two men and one woman are charged with the crime, all in their early twenties.

All three suspects visited a pizzeria in Hofors, in eastern Sweden on April 3rd where they ran into Johansson, who had been one of the woman’s favourite teachers in high school.

When the trio left the restaurant, the woman told her two male friends that Johansson had groped her. One of the men reacted violently, and found out where the teacher lived.

“It’s impossible to see anything of the recording, as it’s so dark, but the sound is fine. This recording is one of our most important pieces of evidence against the accused,” prosecutor Krister Frykman told news agency TT.

The suspects can be heard yelling at each other on the recording, and one of them is heard saying, “Good, he’s dead now.”

Both murder suspects deny the murder charges against them, but admit to assault. The third suspect denied charges of accessory to murder, but admitted that he had been present in the apartment throughout the deadly assault.

The murdered teacher’s daughter told the court that she had visited her father on Saturday, April 2nd. The two also saw each other later that evening at the pizzeria where he met the suspects.

She then passed by her father’s house late Sunday night, but didn’t enter his apartment again until Sunday afternoon. The front door was unlocked, which she took to mean that her father was home, so she entered, and found him dead on the floor in the hall.

The 20 year-old man’s attorney, Gustaf Andersson, said during the trial that the trio’s intention in visiting Johansson at his home was to “give him a good fright,” so that he’d never disturb the 20 year-old woman again.

The man accused of murder denied having jumped on the teacher’s head.

According to the accused, Johansson was still breathing when they left the apartment after the assault.

The attorney told TT that his client did not believe the force he used to be deadly, or even that it could’ve caused the victim permanent harm.

The murder suspect’s comment “Good, now he’s dead” has yet to be explained, however, but according to his attorney, the teacher was still breathing at the time his client made the comment.