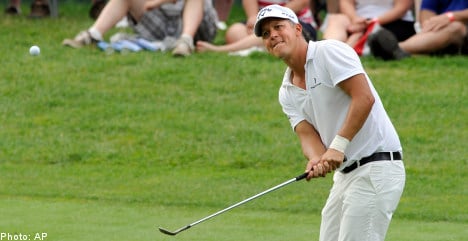 Jacobson, a three-time European Tour winner, took his first US PGA crown in his 188th attempt, taking the $1.08 million top prize at the $6 million event with a 72-hole total of 20-under par 260 on the River Highlands course.

“It feels unbelievable,” Jacobson said. “It has been a long wait. I’ve been getting closer and closer so it feels nice to pull this one off.”

Moore, who fell out of a share of the lead with a bogey on the 72nd hole, settled for sharing second on 261 with Rollins after both fired last-day 63s.

“I wanted to make some birdies and make him notice I was around,” Moore said.

“My goal was to get to 20-under and I was there for a brief moment. It was one of the best rounds I’ve had all year.”

American Michael Thompson was fourth on 262 with American James Driscoll fifth on 264.

Jacobson, who suffered his only bogey of the week to open his back nine on Sunday, became the eighth player this season to win his first US PGA title.

“The last two days I struck the ball as well as I have in the US. I haven’t been in any trouble,” Jacobson said.

“I caught a mud ball on 10. You have to accept those. I was challenged there and I feel like I accepted it well.”

Jacobson had birdied the second and par-5 sixth holes and finished off his front nine with a birdie as well.

The Swede took a bogey at the 10th, his first bogey of the tournament, but answered with birdies at 12 and 14.

Jacobson curled in a tense seven-foot par putt on the 17th to stay level with Moore, who was just ahead on the 18th tee.

Moore, who used a substitute caddie after his main man fell ill Sunday, went from a fairway bunker at the 18th to a greenside bunker, then blasted four feet past only to miss the par putt and leave the Swede alone in the lead.

“I hit that one right where I wanted. It was where I wanted until it was six inches from the cup,” Moore said. “That last one is going to sting a little.”

Jacobson found the fairway and put his approach 12 feet from the flag, putted to the edge of the cup and tapped in for par to complete the victory.

Moore opened with three birdies in a row and added back-to-back birdies at the sixth and seventh. He birdied the par-5 13th and followed with birdies at 15 and the par-3 16th to match Jacobson atop the leaderboard and set up the final drama.

Rollins opened and closed with birdies and made four birdies in a row starting at the par-3 11th in a round of 63.

Thompson, who followed an opening bogey with nine birdies in a final round of 62, enjoyed his best PGA finish.

“I was hitting the ball really well,” Thompson said.

“This is definitely a big momentum boost here. This is just one more notch on the road.”