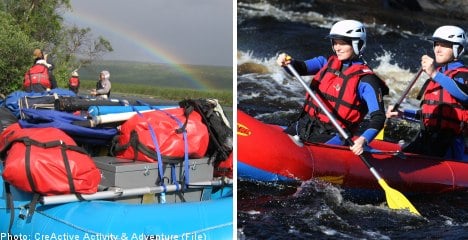 Believe it or not, Sweden is known to have some of the best rafting in Europe.

Trips run the range from short and relaxed rides through serene landscapes to heart-stopping rapids on fast-running rivers.

To zoom in on the extreme of both sides, hop into an inflatable raft canoe for a white-water trip of a lifetime or rope up and set sail on a self-built timber raft.

Those seeking an onslaught of adrenaline and a rafting expedition of a lifetime, a trip northward to the ‘top’ of Sweden is in order.

A short flight to Kiruna puts one within striking distance of what many rafters say are Sweden’s most spectacular river rapids.

To reach the top of the free-flowing mountain river Kaitum, hop a 35-minute helicopter ride and arrive in a new Land of Oz, better known as Tjuonajokk, a land without roads, without civilization.

Upon landing, if you haven’t yet been duly impressed by the pristine surroundings that encircle you while above the Arctic line, prepare to be gob smacked during this epic five-day excursion as you pass through three climate zones and shoot up to Class IV rapids.

The magnificent River Kaitum is a 106 km-long tributary in northern Lappland that flows out into the Kalix River, one of the four major rivers of Norrland that remains untouched by waterpower constructions.

It has three tributary lakes, all of which are deeply embedded between stunning mountain expanses and beautiful black abysses of undisturbed forestland.

“I’ve been running all the rapids and my personal favourite without question is Kaitum – it’s untouched wilderness with crystal clear water and a great offering of calm lakes between tough, fast rapids. It feels like a rollercoaster,” says Love Rynbäck, owner of CreActive Adventure and a professional outdoor adventure guide for more than two decades who admits he still gets a “kick from the really big rapids”.

The variety in rafting requires both athleticism and grace. Be prepared to corral in the calm waters of a lake and in the next minute charge a series of powerful rapids Blues Angel style.

The laws of gravity and river hydraulics are defied as technical stretches of swirling rapids, minor falls and huge rollers are navigated, often reaching upwards of 50 to 60 kilometres per hour.

“It’s a good rush – when facing the big waves in the depths of nature you get the feeling you are quite small,” says Rynbäck.

Days are mixed with running rapids that range from Class II up through Class IV and paddling across lakes measuring up to 100 metres in width.

”The lakes are crystal clear, completely uncontaminated – you can drink directly from them. It’s also a fantastic way to recover and prepare for the next rapid,” Rynbäck adds.

An encounter with a Class VI rapid at the Stourkourtje Waterfall will lead to a brief canoe-lift.

“It’s impossible to pass this rapid with such a heavy raft. Last time it was attempted, three people were flown out in a helicopter with broken legs and other bones,” Rynbäck warns.

A complete arsenal of equipment is required but CreActive Adventure happily supplies a brave rafter with all necessary gear, including the wet suit and waterproof daypack, minus any personal belongings.

Peaceful nights are spent under the big, starry-eyed sky in tents on the enchanting riverside.

Of course, jumping the spectrum from white-water rafting means to go at it Huckleberry Finn style and build a timber raft before piloting the calm waterway of River Klarälven in Sweden’s westerly Värmland.

Part of the longest river system in Scandinavia, the River Klarälven measures in at 460 kilometres and originates in western Sweden’s Lake Roge.

From there it reaches over into Norway before stretching back into Sweden and depositing into the nation’s largest lake, Lake Vänern.

The River Klarälven, or ‘Clear River’, has the longest history of professional use as a logging route in Sweden, lasting up until 1991.

Local instructors are on hand to guide the construction and dismantling of every pioneer’s raft, a seemingly straightforward endeavour with ropes and logs three metres long and of varying girth.

“A completed raft will measure six metres by three metres and weigh about 2,000 kilograms,” boasts the local outfitter Outdoor Experiences in Sweden.

As opposed to rapids and waterfalls, the most challenging obstacles while lazing down the river come in the form of traversing sandbanks and over-hanging branches.

“Here people have a real opportunity to learn how to handle their log raft both with pole and paddles,” the adventure company adds.

A typical timber raft tour will ebb through beautiful rural areas of forests and small, charming villages and farmlands in Värmland with evenings spent camping on the riverbanks.

Life’s daily rhythm is deduced to the motor-less raft, the flow of the river and the creatures of Mother Nature that happen to grace the riverside.

But floating peacefully downriver on a timber raft, watching the world glide by as the river gently dictates each day’s flow is more than just a physical journey.

“Any time one is totally immersed in nature, with or without adrenaline, it awakens something in the soul,” says Rynbäck.

And now that Sweden’s summer sun has indeed arisen, get up, get out and paddle on!