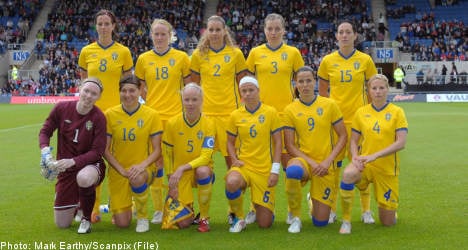 Midfielder Lisa Dahlkvist scored the only goal in the 64th minute to leave Sweden on a maximum six points from Group C action.

They will advance to the final eight later Saturday should the United States seal a victory or draw against Colombia.

In front of a crowd of 23,768, Sweden coach Thomas Dennerby made no changes to his line-up following their 1-0 win over Colombia.

the right side of the backline, but swapped in first game starter Song Jong Sun at the last minute.

The Swedes had a big chance after just two minutes as Lotta Schelin snatched the ball from Ri Un Hyang and raced toward keeper Hong Myong Hui but shot over the bar.

North Korea threatened in the sixth minute as Kim Su Gyong sent her left-footer just wide left from the outside from outside the area. And the April 25 forward headed just wide right in the 18th minute.

Schelin missed an even better chance at the half-hour mark on a counter attack, with Caroline Seger feeding a through ball to the Lyon forward, who had time to look up but found the near right side netting.

The Swedes worked to find another chance in the 42nd minute but fellow forward Jessica Landstrom struck her 25-yard blast over the crossbar.

The Scandinavians had a golden opportunity on the counter attack five minutes after the break with Schelin feeding a through ball to Dahlkvist, who could not get much power on her attempt to allow Hong to clear to corner.

North Korea’s defence did a fine job clearing away a corner kick after Hong had not batted the ball out of the area in the 55th minute.

Sweden captain Seger picked up a costly yellow card at the hour mark and she will be suspended for Sweden’s final group match against the Americans.

After the forward duo of Schelin and Landstrom had failed to get the job done, three Swedish midfielders helped give the Europeans the lead in the 64th minute.

Linda Forsberg sent a diagonal cross from the left side to the far post where Therese Sjögran volleyed back across the goal mouth and Dahlkvist blasted in from four yards.

Swedish defender Sara Thunebro saved the lead in the 74th minute, clearing Ri Un Hyang’s header at the line off a corner kick.

The North Koreans pushed forward looking for the equaliser but Sweden had a better chance in the 83rd minute with Josefine Öqvist shooting just wide of the far right post. Schelin’s tough day continued with two more misses over the bar in the final six minutes.

Sweden next play USA in Wolfsburg on Wednesday, with North Korea and

After losing both their games Colombia and North Korea crash out of the tournament and will play each other in their final group game with nothing but pride at stake.