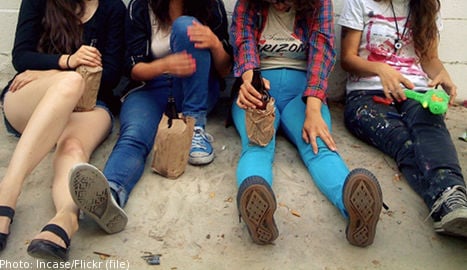 Cigarette smoking is also on the decline, as is the percentage of students reporting that they’ve tried narcotics, according to a recent report from the Swedish Council for Information on Alcohol and Other Drugs (Centralförbundet för alkohol- och narkotikaupplysning – CAN), published on Tuesday in newspaper Dagens Nyheter.

In 2011, the percentage of ninth grade boys who’ve tried alcohol in the past year has sunk to 55 percent, which marks the lowest level since CAN began with their investigations in 1971.

Just ten years ago, that figure was 77 percent.

“We see similar developments in other Nordic countries, and also in the United States. It seems to be an international trend,” said Björn Hibell, CAN’s director, to Dagens Nyheter.

Björn Hibell believes boys’ increased computer game habits may be part of the reason for their diminished interest in drinking.

“Sitting by the computer playing games is perhaps more boy-oriented than girl-oriented. That might be a contributing factor,” he said to DN.

Sobriety organisation IOGT-NTO thinks the explanation lies with a new youth culture, where being alert is important.

“When you play computer games, or rehearse with your rock band, it doesn’t work to be drunk. This is incredibly positive,” said the organisation’s head Anna Carlstedt to news agency TT.

More and more young people are choosing to be open with their sobriety. Youth sobriety organisation UNF has increased their membership figures.

“What new members often say is that they’re incredibly tired of their parents drinking so much. In a way it’s sad, but they describe it as a protest against the adult world.”

CAN investigates alcohol and drug use among 15 and 16 year-olds every year. In 2011’s investigation, roughly 4,600 students participated in their anonymous classroom surveys.