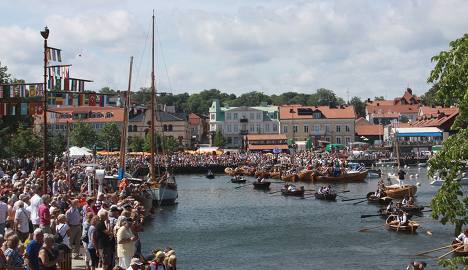 Booming voices busily sell their wares, while further away a gang of rowers admire themselves and their boats, moored by the quay.

Their arms are aching and totally stiff after the long row from the archipelago islands, which lie beyond the inlet where the seagulls squawk loudly.

The Archipelago Festival is one of the East Coast’s largest and longest summer events. The annual festival is a unique experience where visitors go back centuries in time and get to experience how it was in the Västervik archipelago in the early 1900’s.

For seven days, visitors get to see and experience the island markets, an armada of rowing boats from the early 1900’s, auctions in the archipelago, and an entire week’s exhibition of elegant mahogany yachts.

The week begins with the regatta

The regatta used to be called the Baltic Classic Circuit, but this year it has changed its name to the Tore Holm Classic, in honour of the world famous sailor and yacht designer Tore Holm, who was born and raised in Gamleby, just north of Västervik.

Tore Holm was responsible for the wooden boats, the SK95 Britt Marie, the ocean cruiser Sea Eagle II and 6’s May Be and Blue Bird. He also won two Olympic gold medals.

The regatta begins with a banquet and dancing on the jetty at Gränsö Castle on picturesque Gränsö just a few miles outside the city.

From Gränsö ,you can follow the triangle-shaped course of the regatta over the week. There are also exhibition races in Gamlebyviken, a bay that runs from the town and 25 kilometres up along the coast.

There are representatives from four different countries in the race; The United States, Russia, Germany and Sweden, and of course there is always a boat from the town in the starting line up.

The Archipelago Festival really is a journey back in time. A main feature of the festival is the archipelago markets, where you really get to feel what it was like in times gone by. In the Fiskartorget Square, small local food producers sell their homemade delicacies.

As well as sampling such delights and the archipelago handicraft in the market stalls, you can also learn how an ignition bulb motor works, something that sailors often used to use along the embankment.

To see the festival from a grander perspective, you can ride on a horse and carriage, or if that isn’t enough, how about having a go on the hand driven carousel from the late 1800s?

Hasselö, one of the larger islands in the Västervik archipelago, has been inhabited for centuries. Today there are roads for car traffic, restaurants and cabins for hire.

As a tribute to the memory of life on the islands, every year a procession of rowers sets off early in the morning in their authentically refurbished vessels, ready to arrive in Västervik at lunchtime, and be welcomed by thousands of people.

The rowers’ wives and children also sit in the boats, all dressed up in traditional period clothing. In such a moving setting, you get a real sense of the hard and simple, yet idyllic life the islanders experienced in the year 1900.

After the festival, everyone from the rowing club marches up to the huts in the old part of town where the sailors used to live. The Hasselö Boat Race draws the largest crowds of all during the week-long Archipelago Festival

Rågö is an island and nature reserve in the north of Västervik’s archipelago. The island’s nature and cultural landscape consists of old archipelago buildings that the residents of Rågö carefully maintain, among them the newly opened restaurant, which uses only local ingredients.

Every year the Rågö Day marks the end of the Archipelago Festival. During the day you take part in the auction of antiques and bric-a-brac, listen to sailors’ songs, learn about the fishermen’s skills and the traditional local boats and motors, which you can have a go at sailing or rowing in, and much more.

Read more about the Archipelago Festival.

Read more about beautiful Västervik and what you can do there.