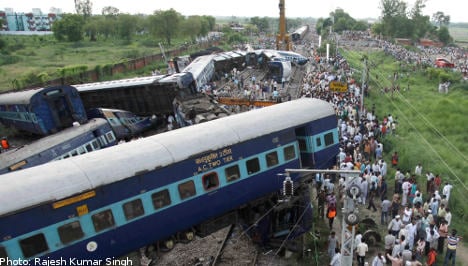 The two Swedes were among the 63 killed in the crash in India’s northern Uttar Pradesh state at the weekend, and a third has been injured, a local official told AFP on Monday.

“Among the victims were three Swedish passengers who were travelling from Kolkata to New Delhi,” said A.K. Pathak, an additional district magistrate from Fatehpur, the area of the crash.

“Two of them died, while one was hospitalised for treatment in Kanpur,” Pathak added, referring to a town 75 kilometres from the state capital Lucknow.

“The toll may still go up. Sniffer dogs have been sent in to detect any bodies trapped under sheets of metal because it is physically not possible for search parties to enter.”

Nearly a dozen carriages of a packed express jumped the rails in Uttar Pradesh on Sunday, with the force of the derailment causing some carriages to mount each other and badly crushing several others.

The Kalka Mail was heading from Howrah, the main station for the eastern city of Kolkata, across India to the capital New Delhi when it sped off the tracks.

Officials said the death toll could rise and that an investigation had been launched.

Railway Board Chairman Vinay Mittal told PTI Monday that preliminary investigations had shown that the signals and the tracks were functioning normally prior to the accident.

Late Sunday, an explosion hit another train in the northeastern state of Assam, but police were unable to say whether the blast was caused by separatist militants active in the area.

No fatalities were reported in that incident but 20 of the 100 injured were described by police as being in a serious condition.

The Guwahati-Puri Express was nearing Ghograpara, about 70 kilometres from Assam’s main city of Guwahati, when the blast struck.

Militants from both the outlawed United Liberation Front of Asom (ULFA) and the National Democratic Front of Bodoland (NDFB) are active in the region, but the cause of the explosion was not immediately known.

Last week 38 people were killed in a rail crash in Uttar Pradesh when a train slammed into a bus carrying a wedding party.

The worst accident in India was in 1981 when a train plunged into a river in the eastern state of Bihar, killing an estimated 800 people.

The railway is the country’s largest employer with 1.4 million people on its payroll and it runs 11,000 trains a day.

Experts say the creaking system, the world’s second largest under a single management, is desperately in need of new investment to improve safety and help end transportation bottlenecks that threaten the country’s economic growth.