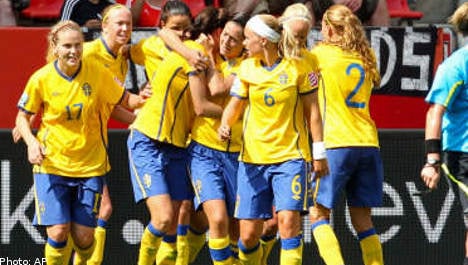 Sweden booked their place for the match in Frankfurt with a 3-1 win over Australia on Sunday and their trademark dance — performed after most goals — is rapidly becoming a feature of Germany 2011.

Japan made the last four by stunning defending champions and hosts Germany 1-0 in Wolfsburg on Saturday as a goal from substitute Karina Maruyama in extra time put her side in the last four.

Despite their nickname Nadeshiko — a pink flower symbolising grace and beauty — the Japanese are proving no pushovers at Germany 2011 and have already beaten Sweden this year with a 2-1 win at the Algarve Cup in March.

Dennerby says he is surprised his side will not be facing Germany, but says the Japanese deserve respect.

“Actually, I had counted on us playing Germany, but the Japanese are fast, technically savvy and we lost to them on the Algarve,” said the 51-year-old.

Japan also held Sweden to a 1-1 draw in a pre-World Cup friendly on the eve of the tournament and their coach Norio Sasaki is expecting a tough match.

“We saw enough from the friendly against them to gain confidence and we have improved since then,” he said.

“We have picked up some experience now by beating Germany and against Sweden now, well, only the gods of football knows who will win.”

Having beaten two-time champion the USA 2-1 in their final group game, Sweden are riding a wave of confidence and veteran midfielder Therese Sjögran is promising more goals having scored against Australia with a crisp strike.

“Germany were frustrated that they didn’t score (against Japan). But things will go differently for us,” said Sjögran confidently.

After collecting the player-of-the-match award for the last two games, Swedish striker Lotta Schelin says her team are now just taking each game as it comes.

Having won the women’s Champions League with Olympique Lyon, the 27-year-old brought the team dance — called Logobitombo — from France and the Swedes have improvised it into their own goal celebrations.

“I know a bit about Japan – weve played them twice this year,” she said.

“We were confident about reaching the semi-finals but weve been taking small steps, talking about every game as it comes along.”

Dennerby says his side have to improve against the Germany-slayers if they want to face the USA or France in the final on Sunday.

“We didn’t defend so well against Australia and for me, we were missing the usual standards of pressure and ball possession,” he said.

“Perhaps we were a bit tired after the USA game.”